While it has been a challenging year for global markets, companies of all sizes have looked for opportunities in countering adversities, particularly in terms of identifying solutions for the Covid-19 crisis.

In some cases this has proven to be something as simple as sanitising products, but at the other end of the scale we are now seeing the emergence of a vaccine that will be rolled out to billions of people around the world.

Many companies have invested considerably in gaining a first mover advantage, and the successful ones have positioned their shareholders to reap the rewards of their efforts.

Amidst this backdrop a smaller company in Achiko (SWX:ACHI), listed on the Switzerland Stock Exchange during the year, is transforming into a health technology company with the rapid development of Teman Sehat, an open source software product that provides an alternative way to manage Covid-19 testing, and ‘Gumnuts’, a potential rapid and low-cost virus detection technology.

Achiko is headquartered in Zürich, with offices in Hong Kong, Jakarta, Singapore and Seoul.

Given Gumnuts will be low-cost and user convenient, with the potential to do frequent mass screening of whole populations, it could be considered the jewel in the crown because of the scalable nature of the technology.

Over the last four months, Achiko has transformed its business strategy to address the Covid-19 pandemic with two major initiatives that sit on top of its fintech investments, which combined can potentially deliver a state-of-the-art telehealth diagnostics platform.

The two pillars that underpin the strategy are Gumnuts and Teman Sehat with the former representing a low cost, convenient, user-friendly and non-invasive Covid-19 testing solution that is viewed by some as superior to what is currently available.

The Gumnuts technology that originated from the laboratory of Australian Dr. Michael Edel (co-founder of Regenacellx.sl), allows very rapid and low-cost detection of viruses and bacteria from saliva using DNA aptamers.

“Regenacellx.sl is a new and small biotech company responding to the, pandemic. We work with expert collaborators in DNA aptamers and nanoparticle technology, to pave the way for applications of DNA aptamers as a diagnostic tool for the detection of human disease,” Dr. Edel says.

This technology is being developed in partnership with Regenacellx.sl, and because of its attributes Gumnuts is intended for use in frequent mass screenings of whole populations or sub-sectors.

Achiko could receive a significant share price boost should it receive positive clinical trial results for its Gumnuts technology, providing a platform to expand its Gumnuts testing, a development that would also benefit Teman Sehat.

Teman Sehat, Indonesian for ‘health buddy’, is a downloadable app that allows individuals and businesses to be able to better manage their Covid-19 risk.

It is now being rolled out in Indonesia where it could potentially become the COVID-19 testing and management standard, laying the foundation for its introduction to other countries.

Adding further flavour to the story is the complementary product offering provided by Teman Sehat.

Achiko could receive a significant share price boost should it receive positive clinical trial results for the Gumnuts technology, particularly given that it would also have positive ramifications for Teman Sehat.

When the two technologies are combined there can be a real-time information ecosystem alerting people to stay away from infection hotspots, but allowing them to feel safe elsewhere.

The result would be a virtual reopening of economies even where there is a significant outbreak as the population could potentially avoid hotspots.

As Covid-19 escalated, shares in Achiko came under the spotlight, surging some 700% in August to a high of CHF1.67 (AU$2.49), but as news regarding a vaccination intensified the company’s shares trailed off and they are now trading in the vicinity of CHF0.35.

However, it could be argued that this doesn’t capture the underlying value in the stock, particularly if it has success with clinical trials being conducted on the Gumnut’s technology.

Achiko could attract a much higher valuation if the company achieves its goal of receiving positive clinical trial results for its Gumnuts technology.

This was the scenario painted by analysts at Pitt Street Research in October who certainly see the company as undervalued, saying that, ‘’Achiko has a better COVID diagnostic in Gumnuts than what is currently being used in terms of cost and patient convenience.”

In crunching the numbers on the company’s financial metrics, Pitt Street Research said, “We believe Achiko should be valued higher than its current market value.

“Our valuation using a probability-weighted DCF (discounted cash flow) methodology yields CHF 1.63 per share base case and CHF 3.48 per share bullish case, both of which represent significant upsides to the current share price.’’

While Indonesia may not be the choice of destination for many clinical trials, it is ideal for testing the efficiency of the Achiko’s products given its large population of nearly 270 million.

It is also worth noting that the number of new cases hit an all-time high of more than 8,000 at the start of December, and as at 6 December, 2020 there had been approximately 78,000 cases recorded.

Most recently it would appear appropriate that Achiko chose to partner with the Udayana University’s Research Department in Bali to study the practicability of a mass testing approach with Teman Sehat and Gumnuts when available.

The partners plan to conduct a study to better understand acceptance of mass testing in the broader population as well as the practicality of mass testing, and its effects on healthcare, consumer and business confidence. 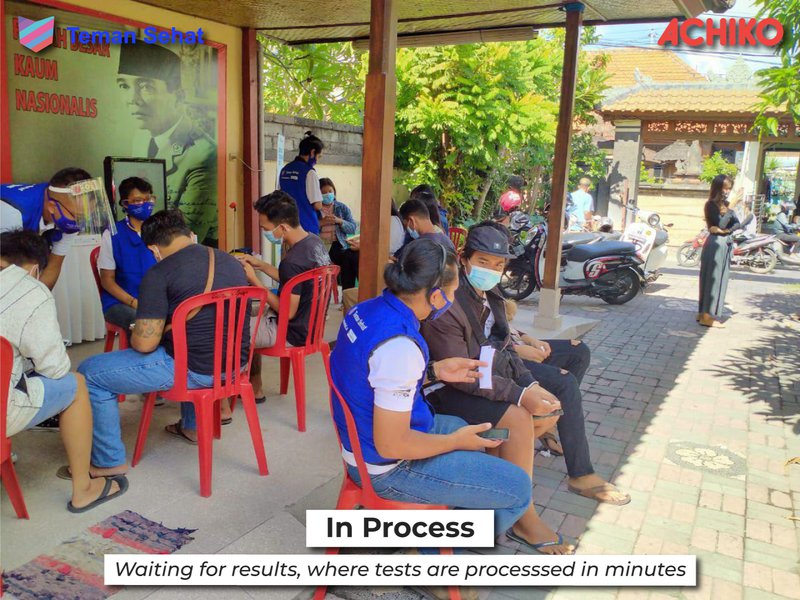 To this end, diagnostic testing for Covid-19 will be deployed across three islands in the province of Bali (Nusa Penida, Nusa Lembongan and Nusa Ceningan), Indonesia, expected to start in late-January 2021.

Udayana is a leading state university in the province of Bali and its research department will be studying not just the acceptability and practicality of mass testing, but also the implications in terms of resources needed for adaptation and integration of Teman Sehat with existing processes.

An accompanying implementation study will monitor the effect that mass testing has on incidence rates, as well as the number of successfully identified close contacts, clusters and mandated isolations.

As we have found in Australia, efficiency at these levels not only successfully constrains the virus, but it can be a determining factor as to whether certain areas can stay open for business.

Achiko and Udayana will be working together to administer Covid-19 testing to the population and visitors of the three islands of Nusa Penida, Nusa Lembongan and Nusa Ceningan (approximately 75,000 people).

The Gumnuts diagnostic test kit for Covid-19 will be integrated with the Teman Sehat mobile health ecosystem app and distributed across the three islands. 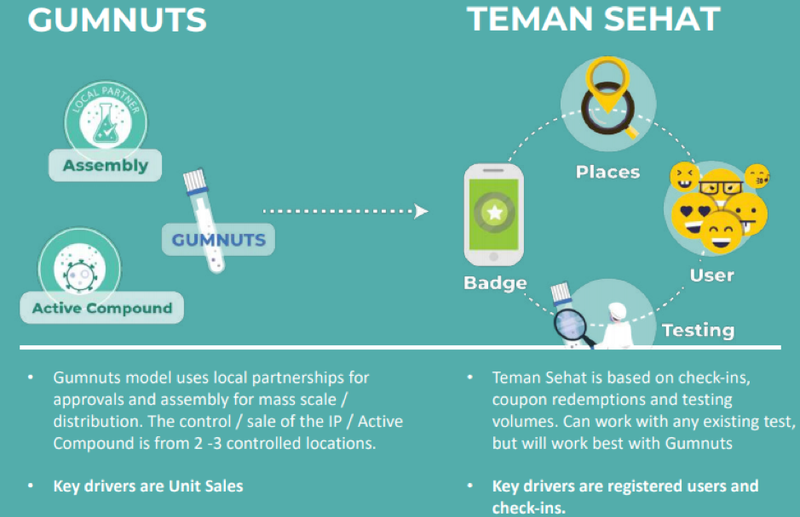 With Teman Sehat, the people living on these islands as well as visitors will be able to book, pay for and manage their Covid-19 testing experience, all while maintaining privacy.

Test results will be mirrored on the Teman Sehat app, which doubles as a digital passport. 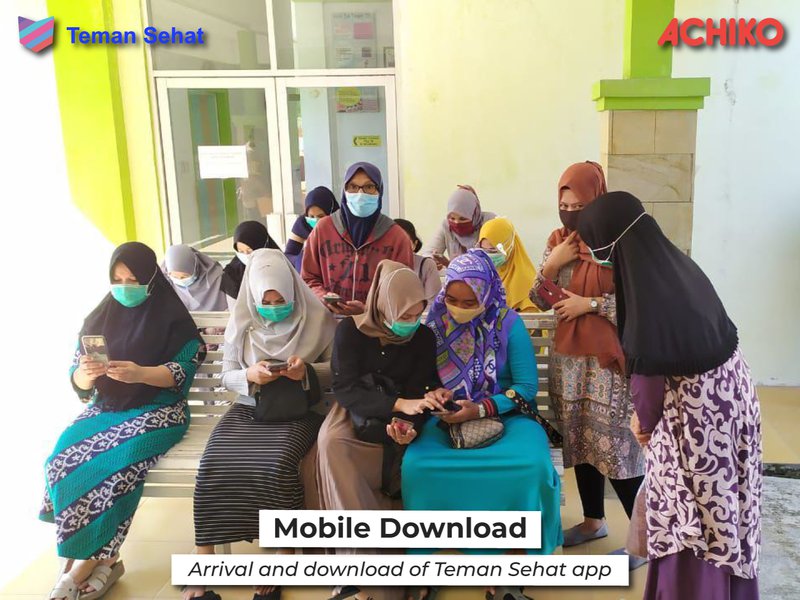 Visitors must test negative in order to board a plane to any Indonesian destination, including these islands.

On the islands, Teman Sehat will regulate access to places with a traffic light system.

Consequently, Achiko isn’t relying on the development of complex accompanying technologies or infrastructure.

Digital passports are commonplace and the ability to regulate access to certain places by using a traffic light system is something that can be employed in most built-up towns and cities. 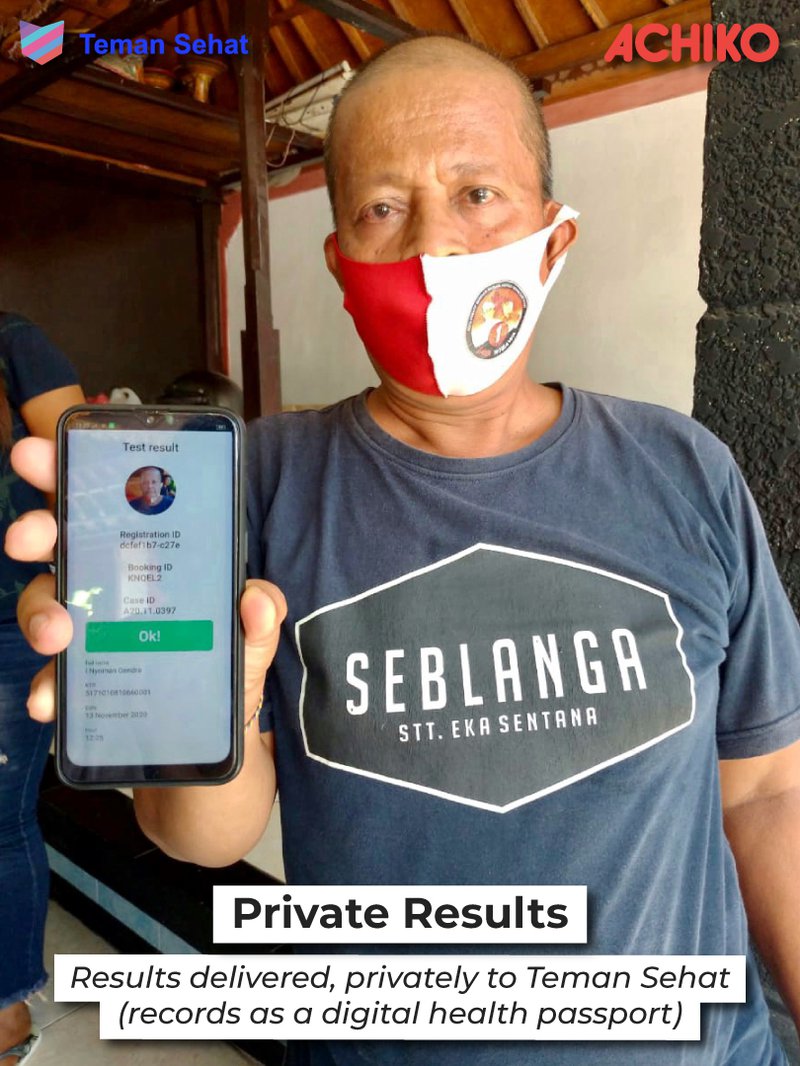 Research findings due within three months

The research findings are expected to become available within three months after launch of the study, serving as a reference point for governments and stakeholders when evaluating cross-border testing in Indonesia and beyond.

Key takeaways from a user’s perspective are its ease of use, rapid diagnosis, affordability and scalability.

Looking beyond the patient experience, this could be a game changer for governments, businesses and healthcare providers alike should it meet management’s expectations of providing an efficient contact tracing capability.

It can be integrated into other digital passports such as the IATA Travel Pass and the World Economic Forum’s CommonPass, further highlighting its wide-ranging compatibility.

Being such a popular travel destination with both remote and high density living, as well as having a significant transient population through its bustling tourism industry, Indonesia should make for an ideal test case.

Achiko has expressed its interest in servicing the travel and hospitality industries, including cruise ships which as experience has shown definitely throw up their share of challenges.

Commenting on upcoming developments and the collaboration with Udayana, Achiko chief executive Steven Goh said, “Whilst the vaccine developments are promising, we firmly believe that vaccinations and testing go hand in hand.

“Mass testing and vaccination passports give people the tools to show their negative test results, allowing them to move freely within a secure environment.

“We’re excited to be working with Udayana in Bali, a place we all love.

“The study will create a proof of concept that we hope will be able to extend to the rest of Indonesia, and to many other countries afflicted by the pandemic.”

A key factor to remember is that it may be some time before vaccinations can be fully rolled out, and based on the rapid acceleration of cases in the US time is running out.

Further, a return to ‘normal’ doesn’t necessarily mean that we won’t be faced with challenges such as this again.

Will there be further waves of Covid, or perhaps worse still, a mutated version that is resistant to the recently developed vaccination?

If Covid-19 continues to re-emerge, demand for Achiko’s technologies could well soar should they be approved.

And don’t forget that the more common flu has historically claimed more lives than Covid-19, suggesting that this could be another target market.