Despite a recent retracement, 5G Networks Ltd (ASX:5GN) has traded strongly in 2019 with its shares more than double where they were at the start of the year.

Developments within the company have contributed largely to the first half rally, and the industry dynamics should work in the group’s favour, particularly given 5G Networks’ core business is improving connectivity and speed of service for more efficient usage of the internet and cloud applications.

With the major telcos now being directed to inform customers not receiving the contracted speed of internet service, and further, provide users with financial recompense or alternative arrangements, the timing of 5G’s entry couldn’t be better.

Positive sentiment towards 5G (black line) compared with traditional telcos is evidenced in the group’s 2019 share price performance against the broader S&P/ASX 200 Communication Index (XTJ) represented by the green line. 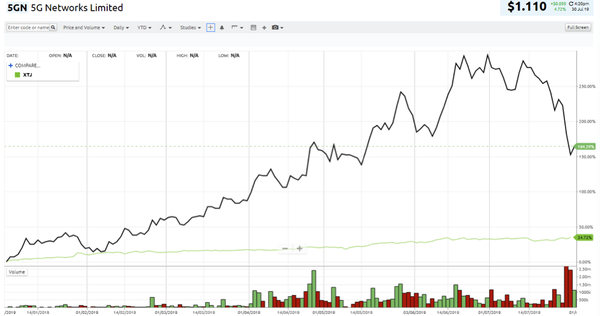 Before we get onto examining the underlying business it is worth noting the reasoning behind recent selling in the stock which has occurred under relatively high volumes.

To achieve supplier incentives and rebates, an additional advanced payment of $1.6 million was made at the end of the June quarter.

The market appeared to perceive this as a negative development, but management’s track record as we will go on to outline indicates a strong understanding of the industry and a particular focus on taking decisions that will benefit the company in the medium to long-term.

Suffice to say, this was a one-off payment, and for forward-looking investors it will not have an impact on the group’s fiscal 2020 financial result, suggesting that these numbers should be the focus for investors targeting the stock.

In fact, the group’s financial performance as illustrated in the following graphic suggests the recent retracement in the share price represents a buying opportunity. 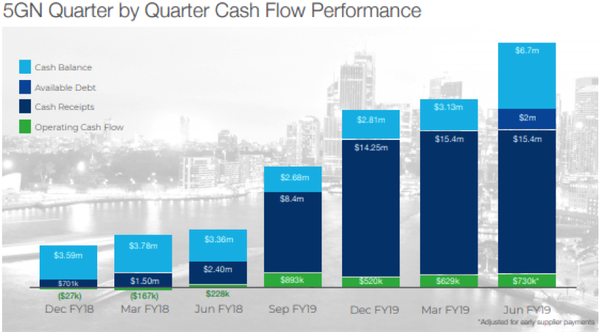 While 5G only listed on the ASX in November 2017, the company has a wealth of experience behind it with the chief executive, Joe Demase being instrumental in steering smaller companies into niche markets and building scale to a point where they were taken over by the major players at sizeable premiums.

Demase has had previous success with Uecomm (acquired by Optus) and Clever Communications (Big Air) so he knows the market well.

However, companies in the information and communications technology (ICT) space often have trouble gaining share price support because their underlying technology is difficult to understand.

On this note, 5G’s strategy is very reminiscent of PIPE Networks, a company founded and managed by Bevan Slattery, one of Australia’s most prominent telco entrepreneurs.

Slattery transformed PIPE Networks from a $12 million company into an entity that was acquired by TPG Telecom (ASX:TPM) for $373 million.

His success was built around developing telecommunications infrastructure that functioned better and was more competitively priced than the big players with a particular emphasis on CBD areas where he addressed the ‘last mile’ issue, an area that we will explain later because it is central to 5G’s business strategy.

Similar to Demase, Slattery went on to manage other ASX listed companies in emerging areas such as data centres and the development of innovative telecommunications infrastructure focused on high density areas.

So Demase certainly has the experience, as he has learnt from the best, particularly insofar as understanding all that goes with developing telecommunications infrastructure and service delivery.

Benefits of investment to be realised in 2020

A number of 5GN’s largest clients committed and re-signed during the June quarter whilst expanding the services they utilise with 5GN.

The retention of these customers will underpin organic growth as the company continues to execute the cross and upsell of its core product suite, a key foundation to the success and maturity of the group’s sales strategy.

Aside from organic growth, 5GN has been a growth by acquisition story, and management is targeting further acquisitions in fiscal 2020. 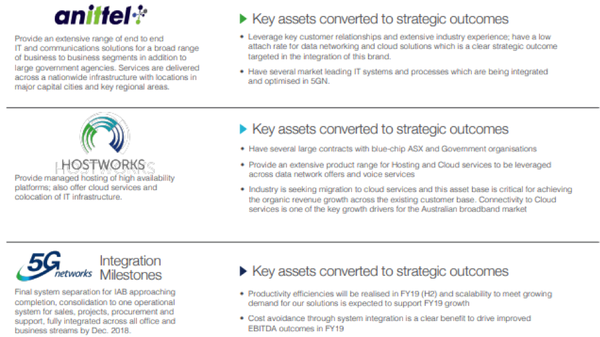 With cash and debt totalling $8.7 million management has the capacity to make earnings accretive acquisitions without earnings per share dilution.

Interestingly, Demase is also scoping out data centres in Sydney as part of his infrastructure expansion strategy.

Managed cloud providers in Sydney and Melbourne are also on the radar.

Capital expenditure of $487,000 in the June quarter was used to expand the customer led fibre network.

In addition to the company’s launch of the National MPLS Network in March 2019, the Melbourne fibre network deployment has continued with over 11 kilometres of fibre installed and under construction, now passing over 500 buildings in the Melbourne CBD and inner metropolitan areas.

Augmenting the existing fibre infrastructure is the growing 5GN wireless network, which now has expanded coverage including Mulgrave, Dandenong, Port Melbourne and Sunshine.

With a strong core network in place, the company has begun to migrate customers from third party data links onto the 5GN managed network services to drive cost reductions and improve profitability across its core offerings.

Discussing the company’s progress in fiscal 2019 and pointing to opportunities in fiscal 2020, 5G Network’s managing director Joe Demase said, “As we complete the financial year I am extremely pleased with the growth achieved in a short period of time.

‘’The team has worked extremely hard to integrate the acquisitions in addition to streamlining our systems, which allows us to continue our process automation.

‘’We will continue to target strategic acquisitions that will utilise our existing infrastructure of network, cloud and data centre capacity with the focus on growing our EBITDA margin.”