Finfeed invests in companies and shares updates, and commentary on their business execution and progress.

Our Big Bet for ONE

ONE will sign on enough new hospital beds at an accelerating rate to achieve a $1Bn valuation (based on 5x to 10x forward ARR multiple) and be acquired by a large health tech provider.

What does ONE do?

Oneview Healthcare (ASX:ONE) is a health tech company that provides hospital patients a “virtual care and digital control centre” at their bedside. ONE’s products are cloud-hosted patient dashboards that help make hospitals more efficient and patients more engaged in their own care.

What is the macro theme?

The pandemic has rapidly accelerated the trend towards healthcare modernisation, and we believe any product or service that brings efficiency to healthcare systems will be highly sought after. As big tech companies like Google, Amazon and Microsoft look to enter the health tech space, companies with an early-mover advantage should thrive or become takeover targets in their own right.

Why did we invest in ONE?

ONE is moving into the growth stage having proven out its tech products in a hard to enter sector (hospitals).

ONE completed a capital raise late in 2021 and with a war chest to fund its growth we look forward to ONE becoming cash flow positive and quickly increasing the number of contracted beds it has in the US.

Under promise, over deliver

ONE’s management team has delivered everything they said they would since we invested, so we are confident they will hit their revenue projections and US market share objectives in 2022.

What do we expect ONE to deliver?

Objective #1: Fast revenue growth and contracted beds in excess of 15,000

For ONE, ‘contracted beds’ is like an ‘active user’ metric for a tech company. We think this will be the basis for judging ONE’s success in 2022. More contracted beds = more revenue. We want to see ONE hit a total of 15,000 in 2022, primarily out of the USA.

ONE now has a proven tech product that is valued by its clients. As of this memo, ONE spent less than 10% of its receipts from customers on advertising and marketing - if its to quickly accelerate contracted beds (revenue), we think upping spend in this area is crucial.

As Samsung tablets are the device which works with the ONE product - Samsung sales reps should be incentivised to push ONE’s product. Likewise, since Microsoft’s Azure Marketplace is the cloud platform that ONE has opted to work with, we would like to see sales growth through this channel.

What could go wrong?

Despite a strong customer retention rate and the endorsement of the product by prestigious hospitals, ONE could lose key clients or not seal as many deals in the coming 12 months, hurting their revenue and share price.

ONE has an early mover advantage, but it is not alone in the space it operates in. We think ONE has a really powerful product that should be helped by its traction at some of the most prestigious hospitals in the US. That being said, a big tech company could launch a competitor product.

Although ONE raised $20M in November 2021, growth companies need cash to achieve their goals. If ONE doesn’t use the money from this raise wisely, then share price pain could follow. This was ONE’s third capital raise since it listed in 2016.

ONE will need to add functionality to its products over time as the health tech industry advances. ONE has flagged that a range of additional features are in the pipeline, and the successful roll out of these features could help it reduce this particular risk as hospitals become more advanced.

What is our investment plan?

We have invested in ONE twice since we announced it as our Tech Pick of the Year for 2021 in March last year.

The first time at 6 cents and the second time in the recent cap raise at 27 cents.

ONE experienced a significant share price re-rate during 2021 after it announced several new contracts and the health tech sector became hot. As per our usual investment plan we partially de-risked our position selling 22.37% of our total holding, achieving a partial free carry.

We plan to hold a position in ONE for the next 3-5 years (and beyond) as it progresses its plan to gain significant market penetration in the lucrative US healthcare market, and may look to take some profit by selling up to ~17% of our holding if the company successfully delivers on the key objectives listed above and the share price hopefully re-rates again.

Disclosure: The authors of this memo and owners of Next Investors, S3 Consortium Pty Ltd, and associated entities, own 8,525,000 ONE shares at the time of writing. S3 Consortium Pty Ltd has been engaged by ONE to share our commentary on the progress of our investment in ONE over time.


Investment Milestones for ONE

Can ONE deliver contracts as we emerge from the 2022 tech wreck?

Accelerating growth, when will the macro catch up?

ONE signs its biggest deal ever

How do Fund Managers Invest in Small Cap Stocks?

Our Past Commentary on Oneview Healthcare plc

ONE quarterly - more hardware ahead of sales push

Our health tech Investment Oneview Healthcare (ASX:ONE) quarterly report has revealed a significant investment in hardware ahead of a major sales push in Q3.

Other things to note were that the increased sales and marketing spend seems to be having the desired effect with the US Sales pipeline growing by over 100% for the quarter.

Given the share price action today, it seems that for now the market is relatively pleased with the results.

Our perspective on the ONE quarterly is that while we’d hoped the company was closer to operating cash flow positive, the sales pipeline should see some bigger conversions in the next quarter after the breakthrough BJC Health System deal in May.

That was ONE’s biggest deal ever and we hope it’s a sign of things to come.

Although there was no specific update on total contracted beds (which is like an active user metric for any tech company), we did some back of the envelope calculations based on the information in this quarterly report, and we think ONE is now hovering around the 14.5K contracted bed mark.

That’s mighty close to our #1 objective from our ONE Investment Memo.

What’s next for ONE? We want to see a big deal come through from the sales pipeline and ONE to smash through the 15K contacted bed mark.

ResMed to Acquire MediFox Dan for $1B

ASX listed health giant ResMed (capped at $42B) will shell out $1B for German health software company MediFox Dan.

MediFox operates on a SaaS model and makes software for providers of out-of-hospital care across a range of business functions.

The significance of this acquisition is that it provides some insight into what multiples companies in the health tech space are willing to pay for growth - which is particularly relevant to our health tech Investment Oneview Healthcare (ASX:ONE).

ResMed’s acquisition of MediFox Dan (which had $83M in revenues last year) will take place at 12x revenue.

Extrapolating roughly from there, a 12x revenue multiple would value ONE at a $177M market cap.

While this is just one example, we think it's a good exercise as the broader tech sector gets battered in an inflationary and rate tightening environment.

We think the key takeaway is that tech's not dead as an investment thematic, it's just hibernating. I.e at some point in the sell off, tech stocks should eventually become a decent value proposition once more.

What’s next for ONE: We’re looking for more sales momentum and for ONE to smash through the 15,000 contracted bed marker - a key metric for measuring ONE’s success. ONE recently signed its biggest ever deal for a further 2,441 contracted beds with the BJC HealthCare network.

Litigation with Regis settled, ONE to receive $2M

Last week, our 2021 Tech Pick of the Year Oneview Healthcare (ASX: ONE) announced that litigation against Regis Healthcare had been settled, with ONE due to receive $2M within ~30 days.

The $2M will add more firepower to ONE’s already really strong balance sheet given ONE had ~€15.1M cash in the bank as at the 31st of December 2021.

As part of our 2022 ONE Investment Memo, we set most of our objectives around ONE increasing its sales capabilities to try and land more deals with major hospital networks and in turn increase revenues.

With the added cash in the bank and any distractions from the litigation gone, ONE now has even more cash to fund the growth of the company.

Next: We expect to see the March quarterly report before the end of this month. We are hoping to see increased revenues and updates on any new deals that have been added to the sales pipeline.

Below is a screenshot from our 2022 ONE Investment Memo, which details why we invested, what we want to see the company achieve in 2022 and the key risks to our investment thesis.

Check out our memo by clicking the image below. 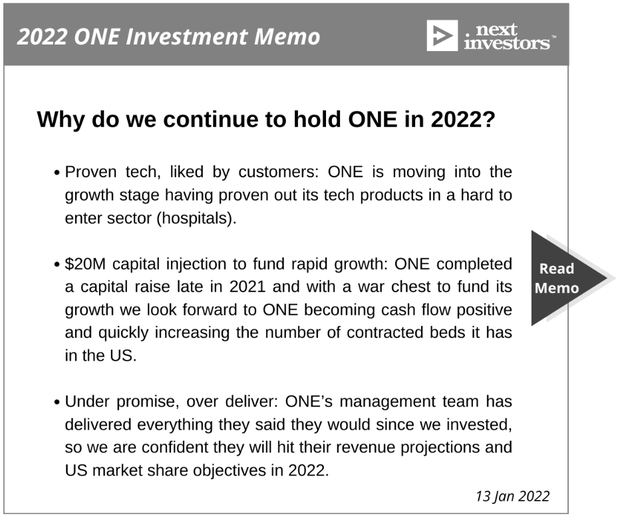 ONE reaffirmed revenue guidance of €12.5 - €14m for 2022 - ONE remains one of our favourite investments and biggest positions.

We think the lag from hardware push should come through in coming quarters with recurring revenue, potentially in the 20-25% range.

ONE has 12,123 beds in RFP/RFI which are still waiting on decisions - these formal processes represent 64% of ONE’s total sales pipeline of 18,927 beds.

RFPs (Request for Proposal) and RFIs (Request for Information) are lengthy affairs that push ONE’s contracted beds through the bureaucratic pipeline.

It’s good to see so many beds potentially there for ONE, now we just want to see its sales and marketing team convert.