Aldoro Resources Limited’s (ASX:ARN) recently undertaken 3D interpretation of the VC1 and VC11 targets located in the Narndee Igneous Complex (NIC) has provided substantial confidence regarding its prospects in the area having revealed the proximity of historical drilling relative to Aldoro’s high ranked VC1 drill target.

The VC1 target is confirmed to be located in a highly prospective geological setting for magmatic nickel-copper sulphides, close to a mafic-ultramafic contact.

VC1 drill holes will target a 8000-18000S modelled conductor which, in conjunction with the favourable geological position, anomalous geochemistry and the geophysical modelling makes it a compelling drill target.

Commenting on the upcoming program Executive Director Joshua Letcher said, ‘’Needless to say, internally we are feeling quite comfortable about the two holes that will be drilled through VC1 as part of the initial drilling program particularly given the target’s shallow depth and significant strike.’’

The following map shows the broader region where the VC1 and VC11 targets are located. 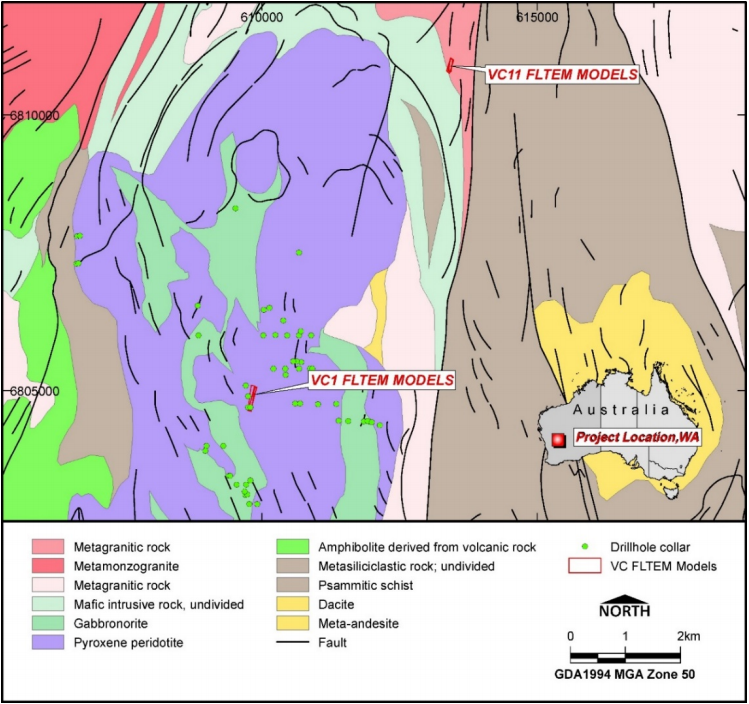 The elevated levels of nickel and copper, as well as the nickel-copper ratio support the presence of magmatic Ni-Cu sulphides at VC1.

The intercepts differ from those previously reported, and at a 500ppm copper cut-off they better represent the geological context and alleviate inconsistencies identified in the 1 metre resampling dataset.

The VC1 target is interpreted to have an east-northeast strike extent of 60 metres to 70 metres, a plunge extent of 490m at -21 degrees towards the north-northeast, and it has a modelled conductance of 8000-18000S.

The geophysical modelling makes it a compelling drill target in conjunction with the favourable geological position and anomalous geochemistry.

A cross-section looking north shows the proximity of historic drill holes to Aldoro’s VC one bedrock anomaly and drill target. 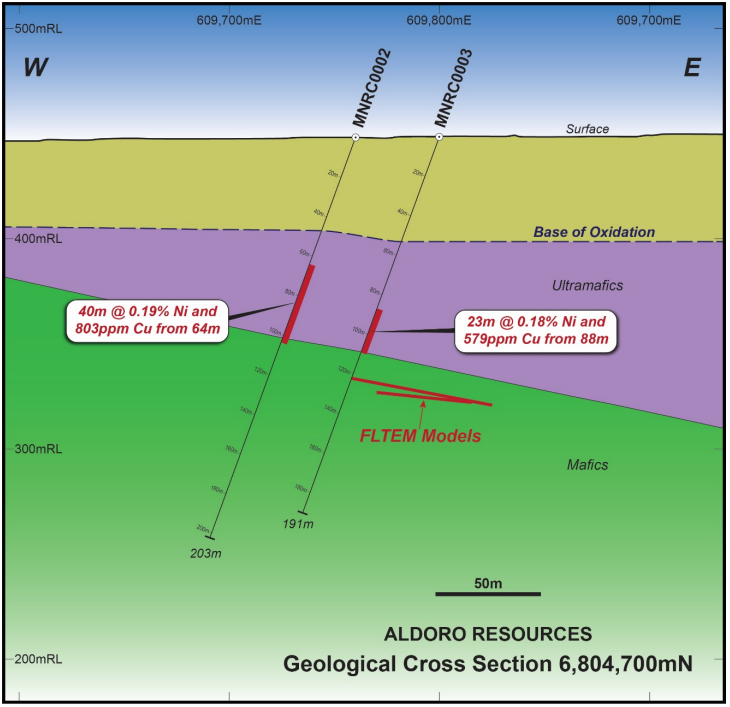 The VC11 target is interpreted to have an east-southeast strike extent of 60 metres to 70 metres, a plunge extent of 250 metres at -52 degrees towards the south-southwest.

It has a modelled conductance of 500-800S, and although this is a subtle target with limited geochemical and geological support, it is a robust greenfields target warranting drill testing.

Management is further encouraged by its strategy of de-risking its exploration program with the application of multiple geophysical methodologies which it believes will substantially increase the chances for discovery at its flagship Narndee Project.

The Narndee Project continues to be Aldoro's core focus going forward, and the company will provide shareholders with regular updates on exploration progress.

There has been some further encouraging news from other players operating in the region with historical drilling by Maximus Resources (ASX:MXR) intersecting nickel and copper, while appearing to have just missed the strong conductor (+10,000 Siemens) discovered by FLTEM and MLTEM conducted by ARN and ground-truthed with soil sampling.