This is promising news for Thomson Resources Ltd (ASX:TMZ) as DevEx has an Earn-In Agreement with the company for the Wilga Downs granted tenement EL8136.

Key terms include DevEx committing to spend $90,000 on the tenement in the first 12 months with the right to earn 80% in Wilga Downs Project by spending $290,000 within four years (inclusive of the commitment).

Should DevEx earn an 80% interest, Thomson’s interest will be split between a 10% contributing and a 10% free-carry to completion of a prefeasibility study (PFS).

Harking back to the exploration results, the diamond hole that was completed to a depth of 630 metres, tested a strong magnetic high which exhibited several similarities to other major, gold-polymetallic deposits in the Cobar Basin region.

The target was modelled by DevEx to lie beneath anomalous base metal intercepts from historical drilling (1970s) and proximal to the prospective fault contact between the outcropping Cobar Supergroup (Devonian) and the Girilambone Group (Ordovician).

Drilling encountered a 13-metre zone of vein to disseminated pyrrhotite mineralisation (a magnetic iron sulphide) with minor copper sulphides (chalcopyrite), close to the centre of the modelled magnetic high. 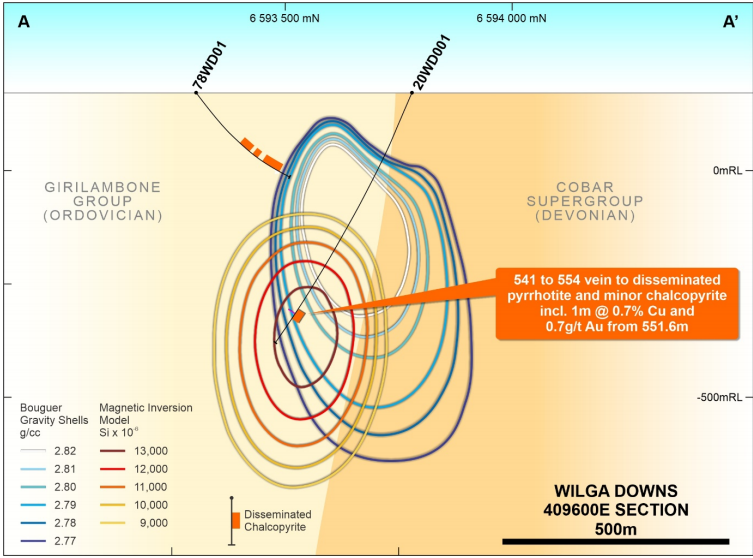 Of most interest was a narrow intercept of semi-massive pyrrhotite grading 1 metre at 0.7% copper and 0.7 g/t gold from approximately 550 metres.

Taking into account associated geological trends, management believes there is excellent potential for a body of magnetic, copper-bearing massive sulphide (pyrrhotite) mineralisation close by which may be significantly larger than that encountered in hole 20WD001.

Considering the scale of the magnetic anomaly at the Wilga Downs Prospect and the close association of gold and copper with the pyrrhotite mineralisation, DevEx is of the view that the potential for the discovery of a significant Cobar-style massive sulphide copper-gold deposit remains strong.

DevEx is now preparing for follow-up exploration with a Down-hole Electromagnetic (DHEM) survey of the drill hole (20WD001) designed to further investigate the potential for a significant copper-gold massive sulphide target.

The DHEM survey is expected to be completed in the coming weeks and will determine if any significant off-hole conductors, representing sulphide mineralisation, can be identified, providing further targets for drill testing.