Shares in K-TIG surge as it enters defence industry

After negotiating an agreement with high profile entities that service government and non-government enterprises involved in the assembling of materials for air, land and sea defence projects, shares in K-TIG Limited (ASX:KTG) opened at 22 cents on Wednesday morning, representing an increase of more than 40% on the previous day’s closing price.

In a joint venture that will involve the deployment of K-TIG’s fully commercialised industry disruptive high-speed welding technology, management has signed a Memorandum of Understanding (MOU) with Axiom Precision Manufacturing and Bisalloy Steel Group Limited (ASX:BIS) to develop a sovereign capability for the Australian Defence Industry.

Commenting on the importance of this agreement and underlining K-TIG’s role in the joint venture, chairman Stuart Carmichael said, “We are delighted to be expanding into the defence market and partnering with Axiom Precision Manufacturing and Bisalloy Steels, two established Australian Department of Defence contractors.

‘’K-TIG will be responsible for the development of a keyhole TIG welding process for high carbon steels typically used in the defence industry”.

K-TIG’s high-speed precision technology welds up to 100 times faster than traditional TIG welding, achieving full penetration in a single pass in materials up to 16mm in thickness and typically operates at twice the speed of plasma welding. 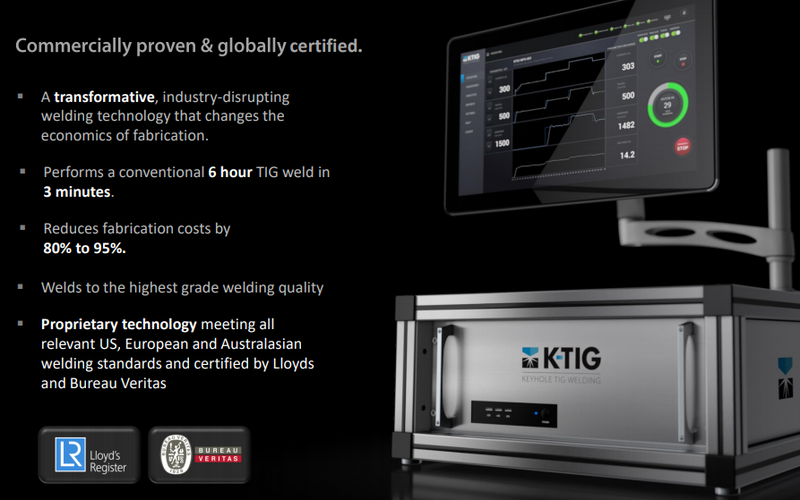 The group works across a wide range of applications and is particularly well suited to corrosion-resistant materials such as stainless steel, nickel alloys and titanium alloys.

Originally developed by the CSIRO, K-TIG owns all rights, title and interest in and to the proprietary and patented technology and has been awarded Australian Industrial Product of the Year and the DTC Defence Industry Award.

K-TIG counts global blue-chip companies such as General Electric, Siemens and Bilfinger as just some of a large list of clients.

Teams up with leading providers of defence products and services

As a backdrop, Axiom Precision Manufacturing, is an Australian advanced manufacturing provider with significant defence and aerospace industry experience, and it currently produces assemblies and sub-assemblies for air, land and sea defence projects.

The other party involved in the MOU is Bisalloy Steels, Australia’s only manufacturer of high-tensile and abrasion-resistant quenched and tempered steel plate used for armour, structural and wear-resistant steel applications.

Development of an Australian sovereign capability in the welding of specialist defence steels will allow Australian industry to maximise its participation in upcoming defence procurements, such as the four-phase LAND 400 project which will involve an investment of between $10 billion and $15 billion.

This comes at a time when there is increasing recognition that Australian needs to invest in its manufacturing capabilities, making it less reliant on other countries that have failed to maintain supply of critical products during periods of duress such as the coronavirus, while also exerting political and economic pressures at the expense of our exporters, in particular primary producers.

Under the terms of the MOU, K-TIG, Axiom and Bisalloy will work together to jointly develop a sovereign capability for Australian industry in the efficient and effective welding of specialist steels vital to the Australian Defence Industry.

However, with the likelihood of government stimulus driving a revitalised manufacturing industry, there could be increasing opportunities for companies such as K-TIG.