Real Energy is an Australian east coast focused gas company with interests in the Cooper and Surat Basins.

Via the subsidiary, Pure Hydrogen Corporation, it is now targeting a plant that can initially produce 36 million kilograms of hydrogen per annum.

Real Energy’s Board has been assessing the opportunities for hydrogen following the release of the Federal Government’s road map for Australia’s National Hydrogen Strategy in November 2019.

In May 2020 the Federal Government committed to invest $300 million in Australia’s emerging hydrogen industry. 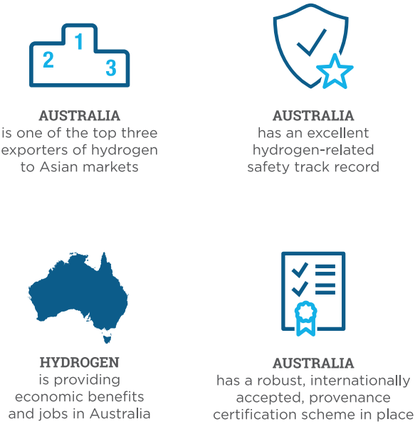 As a guide, a plant of this size has the ability to power approximately 240,000 Hyundai Nexo’s for a year.

Potential project sites are being reviewed in the Surat Basin, adjacent to Real Energy’s existing 50%-owned Project Venus CSG project, as well as another site near Gladstone.

The scoping studies will be undertaken by experienced engineering consulting firms and a dedicated team that Pure Hydrogen Corporation will establish.

Hydrogen is high energy fuel that can be burned with no carbon dioxide emissions and the market is expected to grow rapidly as it can be used throughout the transportation industry, particularly in buses, trucks and cars.

Toyota, Hyundai, Honda and Audi have each either recently released models or are planning to release models that are powered by hydrogen fuel cells.

Utilisation of gas resources for feedstock

The two main ways of making hydrogen are either processing natural gas or through converting water to hydrogen through a process known as electrolysis.

Real Energy’s existing gas resources could be utilised to provide gas feedstock for a natural gas to hydrogen plant.

Additionally, the wastewater from dewatering the coal seam gas field of Project Venus could be used to produce hydrogen.

Explaining the rationale behind the hydrogen strategy, as well as its positioning alongside Real Energy’s other assets, managing director Scott Brown said, “For some time our Board has been assessing the options for establishing a dedicated entity to assess opportunities to build a large-scale hydrogen fuel plant in Queensland.

“With the Federal Government also committed to this sector, we believe our investment and commitment to these scoping studies is appropriately timed and we see enormous potential to develop a hydrogen industry in Australia.

‘’We look forward to providing shareholders with regular updates as we narrow in on a preferred site.

“Whilst this is an excellent development for Real Energy, it in no way detracts from our efforts in advancing Project Venus and extracting value from our Windorah Gas Project.’’

‘’These projects remain important to Real Energy’s ambitions in Queensland and we expect to report on progress with respect to Project Venus very soon.”