It is immediately adjacent to gas infrastructure and is prospective for CSG over its entire area of ATP 2051.

Underlining how the joint venture will progress, Real Energy will be the administrative and commercial operator while Strata-X, at least for the initial phase to predictable reserves certification, will be the technical operator.

Strata-X is engaged in the business of oil and gas exploration and development with a variety of exploration opportunities in Queensland, the States of California and Illinois in the United States of America and the Republic of Botswana.

As illustrated below, the Venus Project is adjacent to gas infrastructure, and the JV plans to expedite appraisal and conversion of resources to reserves to fast track development. 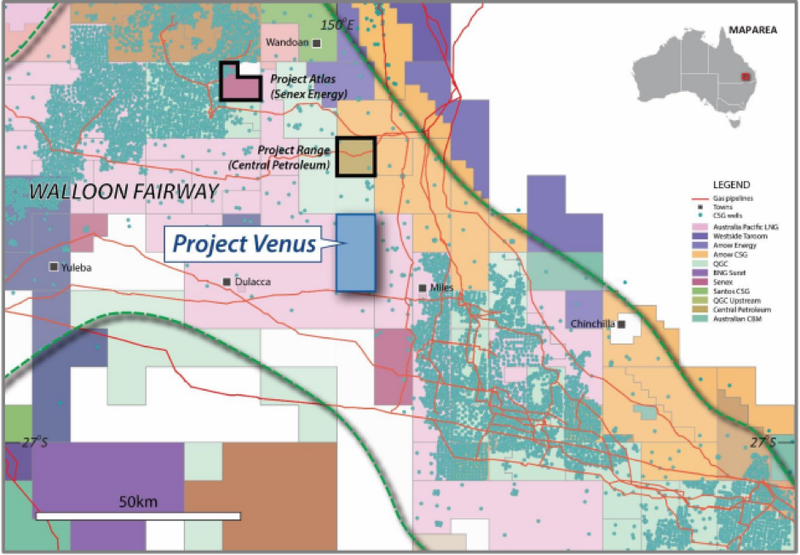 One of the historic wells in the permit, the Connor-1 well, was drilled immediately adjacent to the core hole, then cased and under-reamed (enlarged beyond the regional drilled size), but it was never properly flow-tested.

The Connor-1 re-entry start date will be announced when the contractors and timing are confirmed.

The pilot program will include long term flow-testing of the upper Walloon coals with the objective to prove commercial gas flows rates.

Once commercial gas flow rates are achieved in the pilot program, the Project Venus JV can commence progressively converting the 658 BCF (694 PJ) Prospective Gas Resource to reserves with the goal to fast track development of the project, thereby offering the potential for early cash flows.