Pursuit Minerals Ltd (ASX:PUR) has taken another step towards progressing the development of its Australian assets with the negotiation of an agreement to sell its vanadium and nickel projects in Finland, Sweden and Norway (Scandinavian Projects) for a consideration of approximately $3 million.

In particular, the divestment of the group’s Scandinavian projects will allow management to fully focus on its high priority Warrior and Gladiator projects in Western Australia.

Pursuit has executed a sale agreement to sell its Scandinavian projects to BMR Group PLC (BMR), a company that is looking to raise approximately $2.6 million to fund project development, along with relisting on the AIM market in the UK.

During the option period, BMR is liable for all costs associated with maintaining the Scandinavian projects in good standing and all other related expenses.

The sale is conditional on both BMR and Pursuit shareholders approving the transaction and BMR having raised GBP £1.5 million (A$2.65 million) to fund its exploration program.

Pursuit has received confirmation from the ASX that the sale will only require shareholder approval in accordance with ASX Listing Rules 11.2 and 11.4.

Pursuit and its shareholders will continue to have the opportunity to participate in the growth of the Scandinavian Projects through BMR, an entity that will have sufficient resources to further develop the nickel and vanadium assets and be better positioned to progress the projects given it is a UK company without the same COVID-19 travel restrictions that are preventing Pursuit from moving ahead with the projects.

Commenting on the benefits of the sale, Pursuit chief executive Mark Freeman said, “The strategic sale of the Scandinavian Projects has come at an optimum time, freeing up the company’s resources and capital to focus on our Australian projects, in particular the Warrior Project.

‘’Shareholders will continue to share in the upside of the Scandinavian Projects as BMR will be able to advance the projects in a Covid-19 environment.’’

Why Warrior is the key focus

The Warrior Project tenement areas are located within the geological province which has been demonstrated to host mafic and ultramafic rocks that contain significant PGE-Nickel-Copper-Gold mineralisation, including the Gonneville intrusion on the Julimar Project. 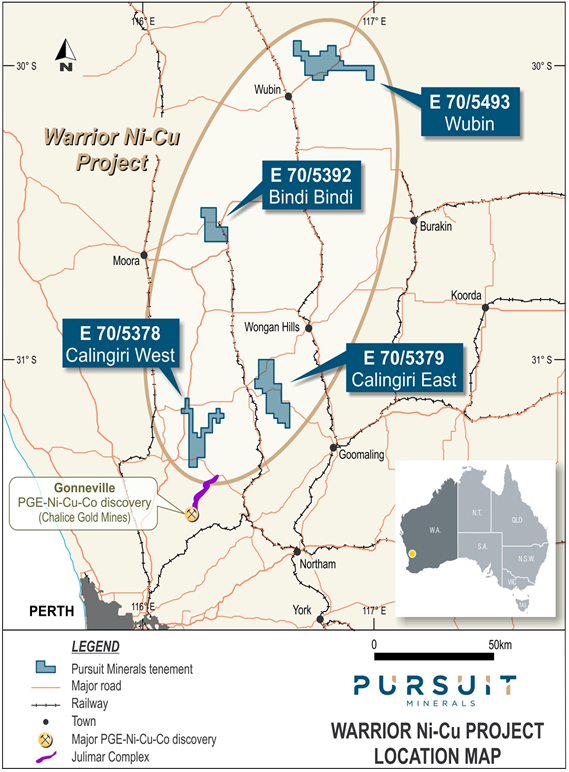 Previous geochemical sampling on the Calingiri East tenement application defined a gold and copper anomaly over 14 kilometres of strike.

The Calingiri West tenement application covers part of the Sovereign Magnetic Complex as interpreted by Devex Resources (ASX: DEV), and it is immediately adjacent to late-time airborne electromagnetic anomalies recently defined by Devex.

The Bindi Bindi tenement application contains ultramafic outcrops anomalous in nickel, and it is adjacent to Liontown Resources (ASX: LTR) Moora Gold-PGE-Nickel Copper project which contains a number of prospects including the southern portion of the Bindi Bindi ultramafic complex.

While palladium was not assayed, drilling on the neighbouring licence held by Chalice Gold returned anomalous palladium associated with platinum.

Consequently, Warrior shapes up as an attractive nearology play, particularly when you consider that shares in Chalice Gold have recently hit an all-time high of $4.69, up from 16 cents less than 12 months ago, an increase of 2800%.

It is worth noting that shares in Pursuit have also performed well in the last four months, having increased six-fold to levels not seen since early 2019.

Pursuit will commence fieldwork on the Warrior Project in the March quarter, including geological mapping, rock chip and soil geochemistry and electromagnetic surveying.

This will be followed by a drilling program once targets have been identified.

Preparatory work on the project has commenced and it has focused on the interpretation of aeromagnetic data covering the four tenements in order to identify magnetic anomalies that are potentially due to mafic and ultramafic intrusions.