By 2025, 500,000 tonnes of refined nickel will be used annually in lithium-ion batteries for electric vehicles (EVs).

This equates to a five-fold increase from the amount of nickel used in EVs in 2018.

Pursuit listed on the ASX in August 2017 following the acquisition of a portfolio of projects from Teck Australia Pty Ltd, which remains the company’s largest shareholder.

Its project portfolio is focused on Battery Metals nickel and vanadium. In 2018, the company was granted exploration tenements in Sweden and Finland, covering projects with historical deposits of vanadium and extensive confirmed areas of vanadium mineralisation.

In February 2020, Pursuit expanded its portfolio through an Option agreement, with the ability to purchase 100% interests in the Espedalen, Sigdal and Hosanger projects in Norway. 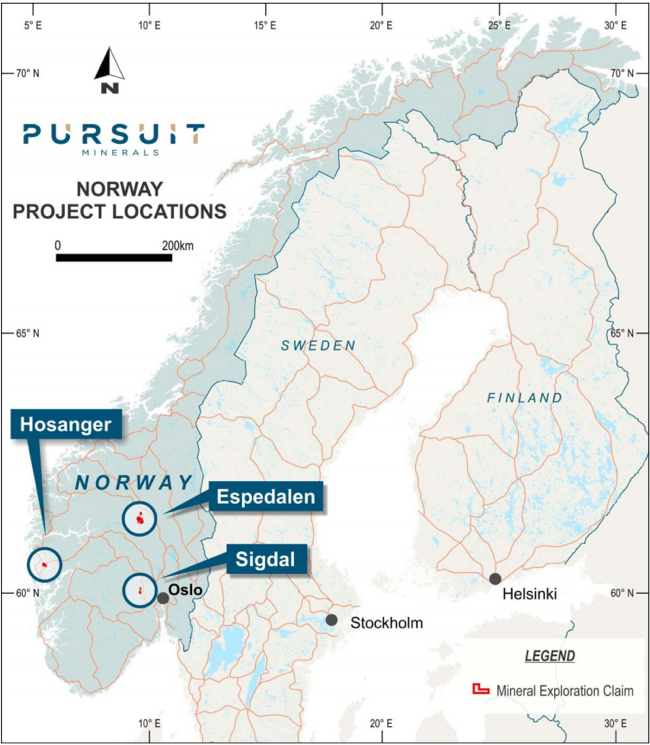 The projects comprise 20,000 hectares of exploration licenses and are located in three separate historic mining districts that were identified through EMX's regional generative programs and acquired in 2018.

Pursuit is required to pay US$25,000 cash, issue 20 million shares and incur exploration expenditure of US$250,000 in 12 months to become entitled to exercise the option to acquire 100% of the projects.

Pursuit chairman, Peter Wall explained “The transaction structure that has been negotiated is relatively non-dilutive to existing shareholders, with only a very modest number of shares being issued upfront. This was an important factor in proceeding with the transaction in order to preserve and maximise shareholder value.”

The Stormyra Mineral resource is open at depth.

Drilling will be undertaken, to determine if the Mineral Resource can be expanded and to further investigate encouraging drill intersections including: 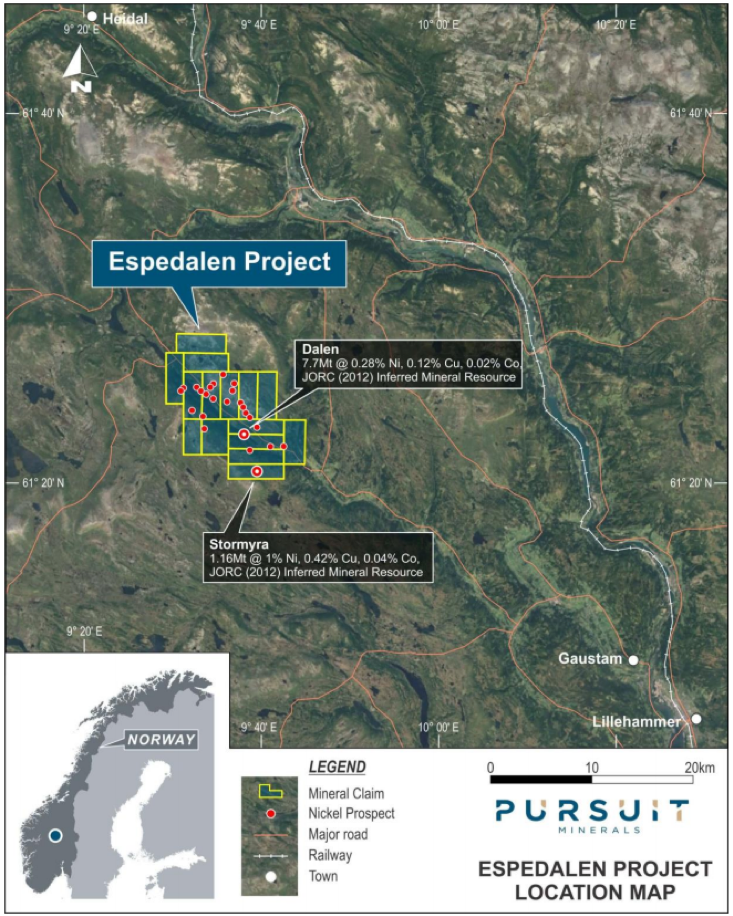 The Espedalen Project also contains 10 prospects with nickel intersections of at least 5m @ >1% Ni which warrant follow up drilling.

The Sigdal Project contains a geophysical conductor associated with historical mine workings, which has only been tested with two short drill holes, returning gold grades over 10g/t with encouraging nickel and copper mineralisation including: 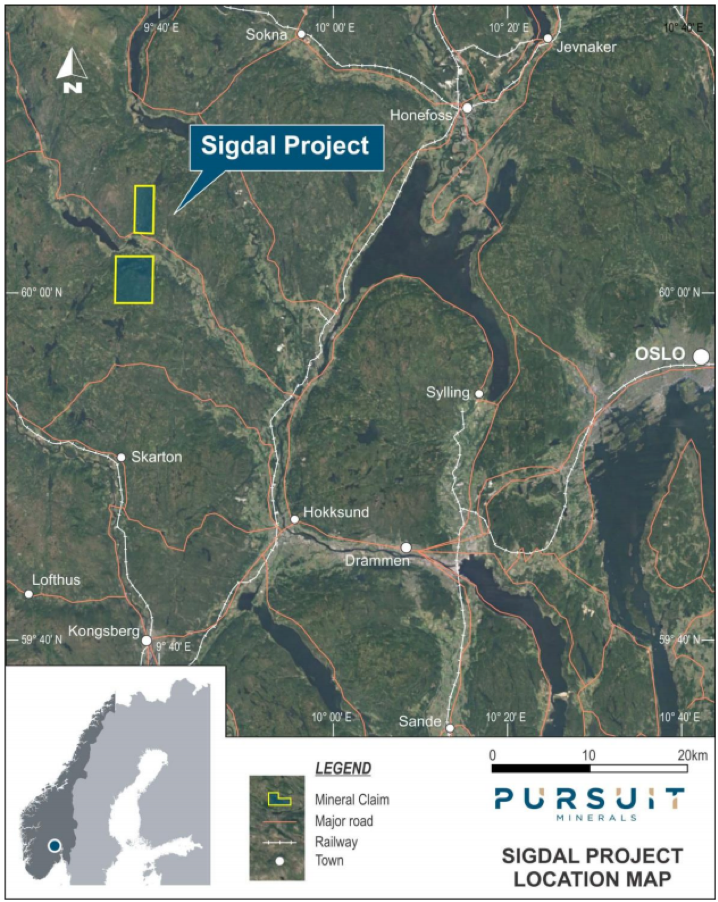 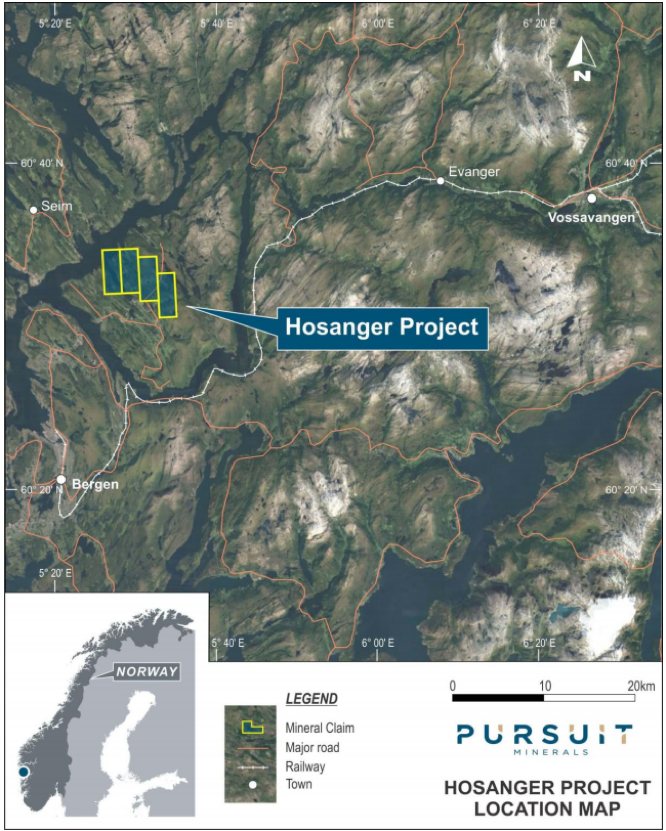 Norway led the world in nickel production during the 1870s and was producing 75% of the world’s nickel by the turn of the century with over 40 nickel mines in production. More recently, the Bruvann Ni-Cu-Co mine, with 6.8Mt ore, operated between 1989-2002.

Glencore currently operate the Nikkelverk nickel refinery at Kristiansand in southern Norway, which has been refining nickel concentrate and exporting nickel products since 1910.

These mines were generally on the smaller to medium scale, however there is certainly potential here for much larger scale operations supported by modern mining knowledge and techniques.

Interestingly, the southern Norway location of Pursuit’s projects is geologically analogous to one of the world’s largest nickel mines: Voisey’s Bay nickel deposit in Labrador, Canada contains 141Mt nickel at 1.6%.

This shared geological history could point to Norway having a larger deposit lurking beneath the surface — possibly even of the scale of Voisey’s Bay.

Pursuit’s immediate focus is on the Espedalen Project, where it will:

Over the coming 12 months, the $2 million capped Pursuit will rapidly move to define and test nickel drill targets with the goal of expanding the known nickel deposits and discover new nickel systems and potentially boosting its market value.

With a limited number of quality nickel sulphide projects available worldwide, Pursuit is now just one of a handful of ASX listed companies with interests in an advanced nickel portfolio.

This is important, as there are few opportunities on the ASX to invest in companies with high quality nickel projects — particularly those with existing nickel JORC resources.

Backed by an experienced management team, having demonstrated its ability to quickly progress projects in Scandinavia, there’s a lot of potential to explore here — particularly for the ASX junior currently priced at just 0.6 cent per share price and with a sub-$2 million market capitalisation.

Additionally, protecting Pursuit on the downside is Pursuit’s option to acquire these projects at a really attractive price and with minimal dilution to existing shareholders.

The company is fully funded to complete these exploration programs this year.