Nepean continues to deliver for Auroch as Leinster looms large

This comes within a fortnight of nickel hitting a near seven-year high.

Importantly, further high-grade nickel sulphide intersections have been delineated including 2 metres at 2% nickel and 0.3% copper from 66 metres and 4 metres at 0.77% nickel and 0.05% copper 25 metres.

The project is operated under the company’s 80:20 joint venture agreement with Goldfellas Pty Ltd.

Twenty drill-holes have been completed for approximately 2,400 metres of the company’s maiden RC drilling programme at Nepean, comprising 10 shallow near-mine drill-holes and 10 regional drill-holes testing aeromagnetic targets along the 10 kilometres of prospective strike.

These results build on previous quality intersections from the first six drill holes of the program at Nepean which included impressive grades of up to 1 metre at 5.6% nickel and 0.25% copper from 60 metres.

This, along with the features of the Nepean Nickel Project showing planned and completed drill holes relative to aeromagnetic highs are shown on the following map. 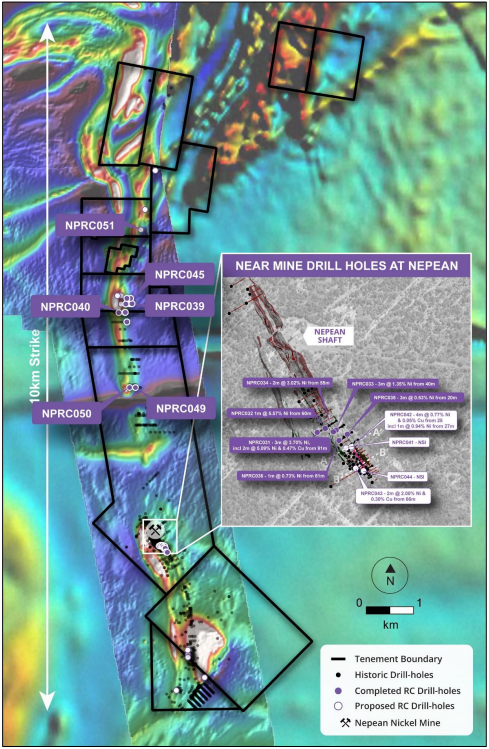 A further 5 drill-holes have been planned to test key areas of the shallow near-mine high-grade mineralisation and will be drilled immediately following completion of the current drill-hole.

Samples from these additional holes will be prioritised at the lab with results expected within the next 2 to 3 weeks.

All exploration drill-holes will be cased for follow-up down-hole electromagnetic (DHEM) surveys to test for any nearby conductive units that may represent massive nickel sulphide mineralisation.

With the additional shallow drill-holes planned near the historic Nepean mine, the current drill programme is expected to continue for another 10 to 15 days, after which assays results will continue to be received and interpreted.

Paving the way for further drilling will be a high-powered ground moving loop electromagnetic (MLEM) survey over priority target areas of the 10 kilometres of strike, due to commence this month.

Further, diamond drilling will commence next week to test the high-priority aeromagnetic anomalies along strike from the Horn Prospect at the company’s Leinster Nickel Project. 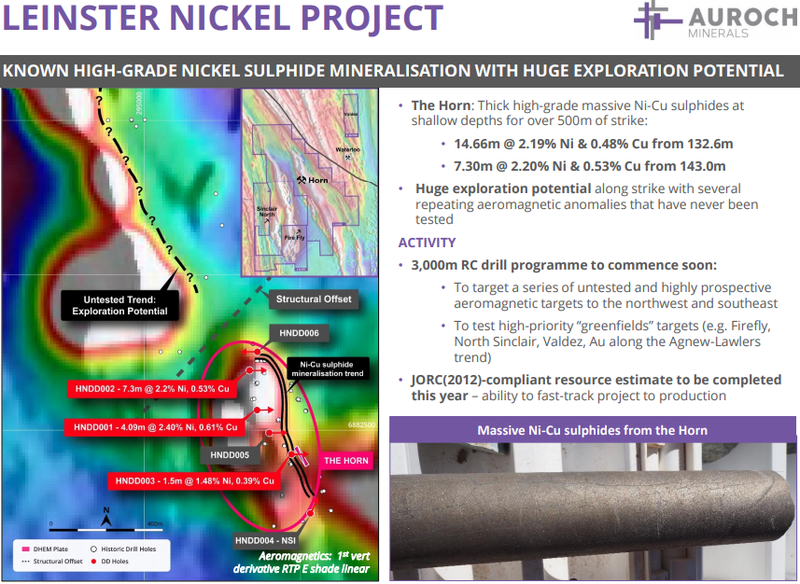 The Horn has demonstrated thick high-grade massive nickel-copper sulphides at shallow depths for over 500 metres of strike.

As indicated above, aeromagnetic data is promising and with a resource estimate to be completed by the end of year, the company could be positioned to bring the project into production in a relatively short time frame.