On Monday morning, Los Cerros Limited (ASX:LCL) released its quarterly report for the three months to September 2020 with key features being the commencement of drilling, an exceptional first hole at Tesorito, an expanded drilling capacity and the strengthening of its balance sheet following capital raisings to a value of $13.5 million.

The latter was important in that it resolved a $3.5 million debt over through the forward payment of approximately $2.2 million, eliminating this debt entirely.

The company also move to 100% ownership of its Chuscal asset with former joint venture partner AngloGold Ashanti exchanging its stake in the project for shares in Los Cerros, effectively an endorsement of its belief in the project and management’s ability to efficiently execute on its plans.

With three drill rigs, significant funding and a backdrop of a strong gold price (US$1900 per ounce) and investor momentum, Los Cerros is committed to an extensive exploration program heading into 2021 across multiple very promising targets within the Quinchia Gold Project in Colombia.

Indeed, there has been significant investor support for Los Cerros, evidenced by both its successful capital raisings and a substantial increase in its market capitalisation.

On this note, the group’s shares were up by about 400% during the quarter, hitting a high of 21 cents, and since eclipsing that in mid-October.

This is reflected in the company’s market capitalisation which has increased from just over $10 million at the start of the September quarter to nearly $80 million.

It is worth noting that the in-ground worth of Los Cerros’ established resources and reserves position could easily support a valuation-based share price rerating, suggesting that even despite the strong run in recent months further upside could be imminent.

Within 3 kilometres of Miraflores is the Tesorito near-surface porphyry and the Chuscal porphyry target.

There are several other targets within the region, including the Dosquebradas deposit which has an Inferred Resource of 459,000 ounces grading 0.71 g/t gold. 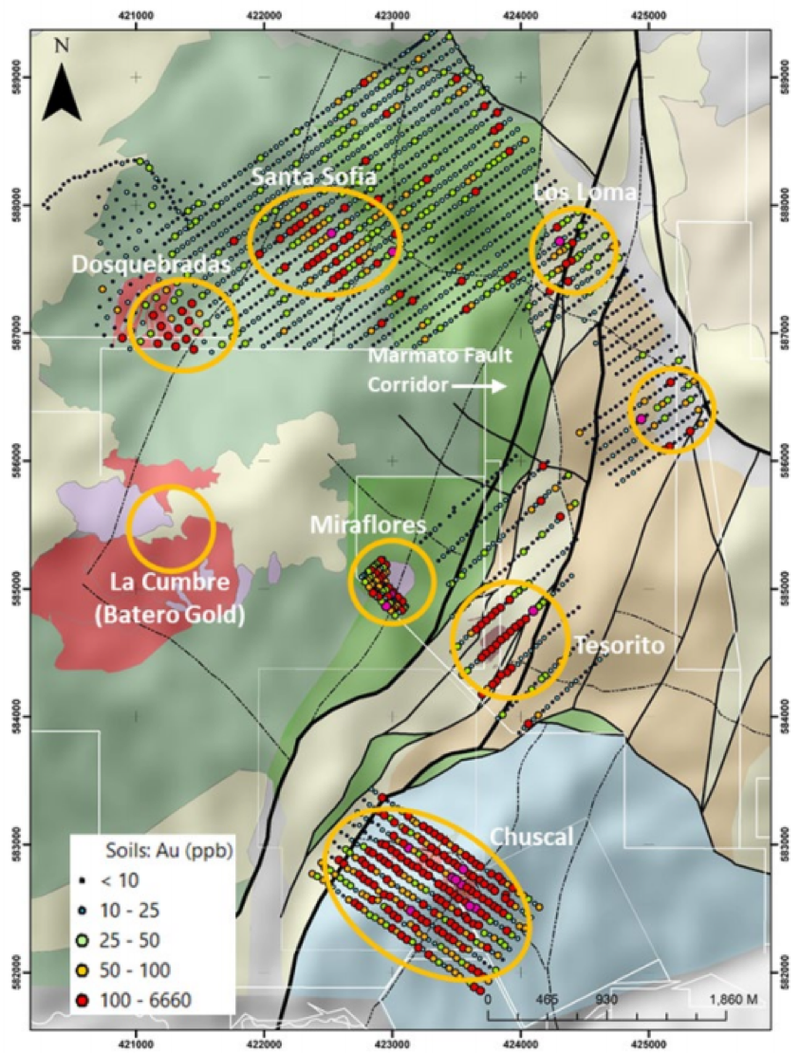 Following this transformational period, Los Cerros enters the December quarter with commitment to a three-rig drilling program over multiple sites and funding to sustain an aggressive exploration program well into 2021.

Understandably, management is proud of its achievements in recent months and during discussions with managing director Jason Stirbinskis he said, “I usually don’t look forward to the hours required to produce a quarterly report, but this one was a pleasure to write as it’s been a transformative quarter for the company, having raised $13.5 million, dispensed with $3.5 million debt and acquired 100% of Chuscal as we welcomed Anglogold Ashanti as a shareholder.

‘’On the exploration front we delivered a spectacular gold intercept at Tesorito South and a brilliant promising first hole in Tesorito North.

‘’Our drilling capacity has been expanded significantly with two diamond rigs running and our own rig about to start to make three rigs drilling”.

Given the highly prospective region being targeted as indicated by the surrounding multi-million ounce projects on the following map, there is a strong chance that Los Cerros’ share price will continue to track north as exploration results come to hand. 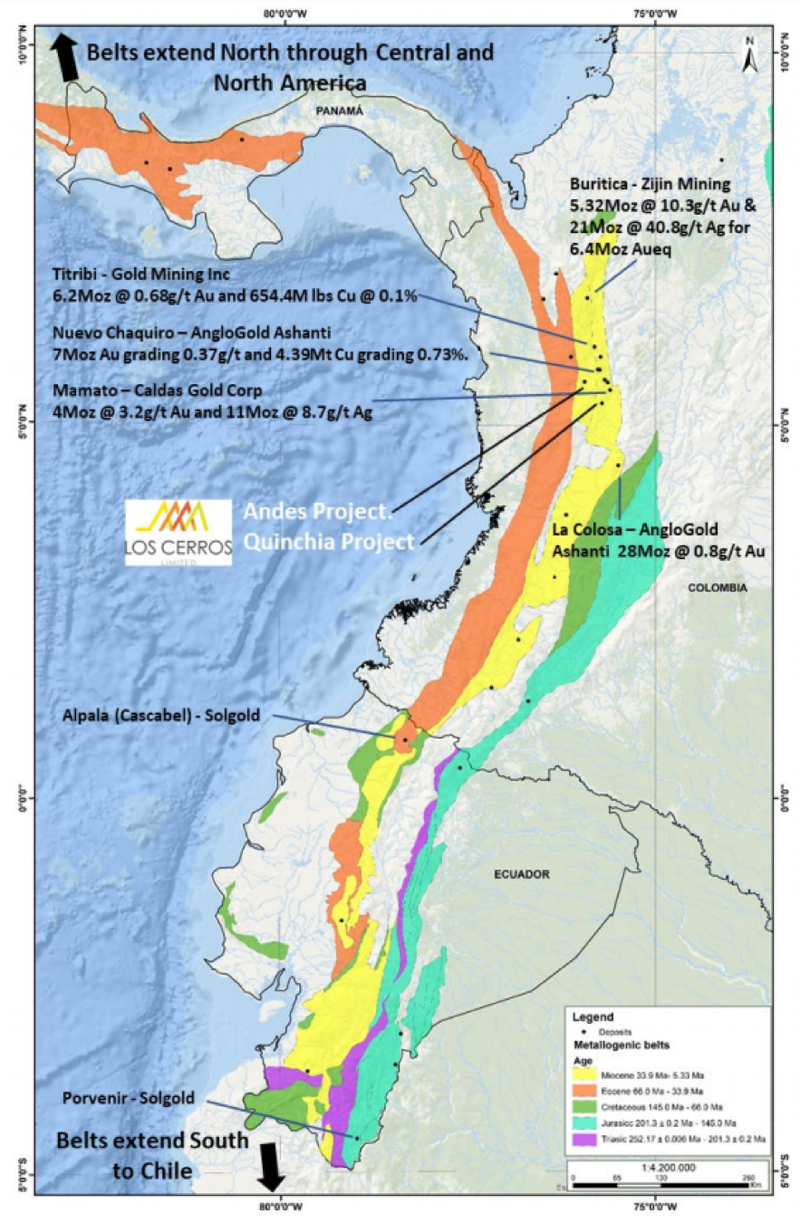 Tesorito hole TS-DH08, the first hole of the current drilling program, delivered a promising start to the campaign, entering mineralisation immediately at surface with 18 metres at 2 g/t gold, including an interval of 6 metres at 4.1 g/t gold from 6 metres correlating to a mapped epithermal vein.

Diorite porphyry mineralisation with epithermal vein overprinting continued for 230 metres down hole to produce a very wide intercept of 230 metres at 1 g/t gold from surface.

Management was buoyed by the identification of geological features normally associated with porphyry gold-copper deposits.

TS-DH09 was broadly designed to determine underlying lithologies and porphyry vectors and successfully intersected 360 metres at 0.4 g/t gold from surface.

Of most interest was a 157 metre wide zone from 141 metre depth showing moderate to strong sericite and potassic alteration, porphyry style mineralisation, high temperature hydrothermal features and elevated copper, molybdenum and sulphur assays, once again enhancing the prospect of identifying a porphyry system. 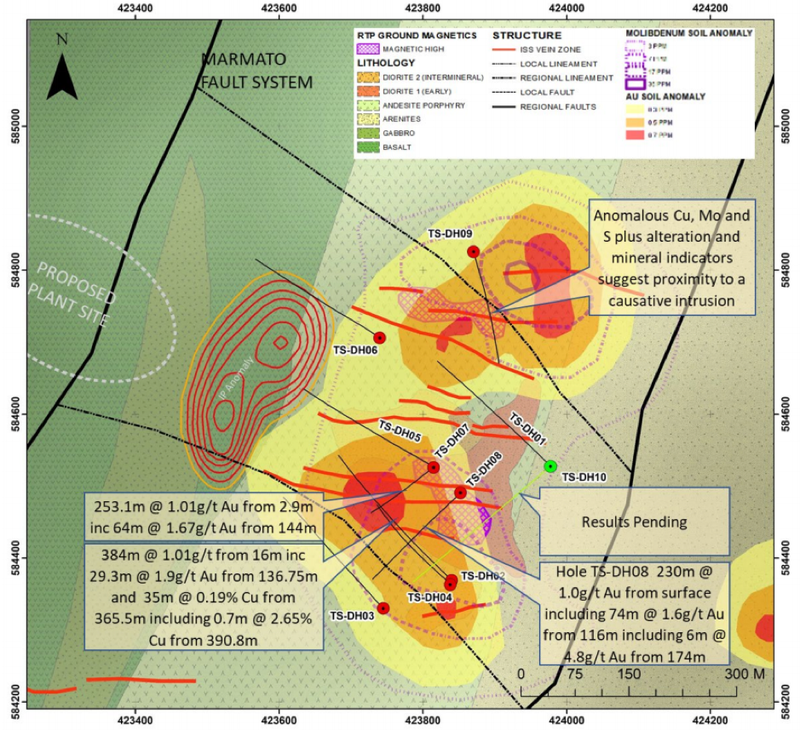 Drilling commenced at Chuscal during the quarter and it is intended to test two broad exploration strategies.

Initially the program will focus on short-hole, step-out drilling pursuing near-surface gold and providing critical information to assist in targeting the mineralised porphyry(ies) that are interpreted to be the source of the extensive porphyry associated gold encountered over an expansive area of Chuscal.

The program will then drill test the resulting porphyry targets, another potential share price catalyst as assays come to hand.