Dosquebradas is one of three gold porphyry systems within three kilometres from the established gold resource of 877,000 ounces at the company’s Miraflores deposit that forms part of the Los Cerros’ Quinchia Project in the prolific Mid-Cauca porphyry belt of Colombia.

As part of its broader review of the Quinchia Project, Los Cerros recently commissioned a review of the Dosquebradas gold deposit.

The review included the conversion of a resource, previously calculated under Canadian NI 43-101 standards by TSX-V listed Seafield Resources Ltd in 2011 to an Inferred Resource compliant with ASX JORC 2012 standards.

It resulted in a maiden JORC Inferred Resource estimate of 20.2Mt containing 459,000 ounces of gold, grading 0.71gpt Au being established for the Dosquebradas deposit.

Given the substantial body of work previously undertaken, establishing a JORC Resource was a low-cost exercise and was considered a sensible exercise to help demonstrate the substantial gold inventory already existing within Los Cerros’ Quinchia portfolio.

This resource conversion is the beginning of a review of exploration by previous explorers at Dosquebradas.

Dosquebradas is also located just 1.5 kilometres from the advanced La Cumbre deposit owned by Batero Gold (TSX-V: BAT) that has a resource of similar grade (43-101 Canadian standard, not JORC) to that of Dosquebradas.

Batero’s tenement is quite advanced and similar to Los Cerros’ Dosquebradas deposit so Los Cerros can expect to learn a lot from their experience, while the joining the two projects is an obvious possibility down the road. 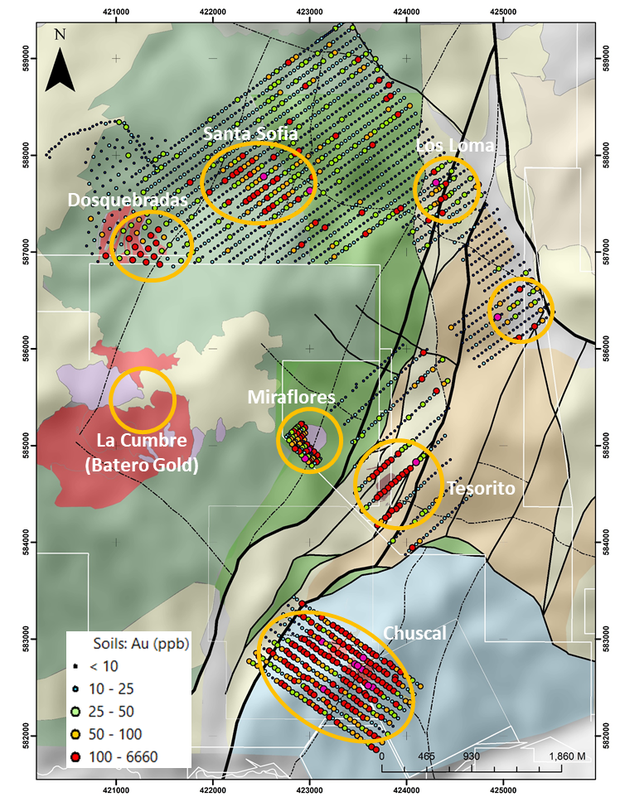 Los Cerros see considerable potential to further grow resources within the Quinchia Project through continued exploration of our prospects at Tesorito and Chuscal, both of which have delivered exceptional intersections of wide zones of gold, starting from surface.

Additional drilling of each of these deposits is under consideration for the months ahead, following completion of the Company’s ongoing drill targeting work.

The company’s Managing Director, Jason Stirbinskis said: “Not included in the JORC compliant estimate of 459koz Au Inferred Resources are an additional five diamond drill holes drilled in 2012 after the original Resource calculation by Seafield but before a receiver and manager was appointed in 2014. These holes showed considerable promise and further justify additional investigations of Dosquebradas”.

Whilst the review is in its infancy it is apparent that financial pressures prevented Seafield from completing an integrated exploration program at Dosquebradas, Tesorito and Miraflores Prospects, comprising the modelling and drill testing for the cores of these impressive porphyry systems and understanding the controls to overprinting high grade epithermal zones.”

Planning for the next phase of drilling at Quinchia is progressing, with 3D modelling of Tesorito, Chuscal and Miraflores underway, as well as advanced planning of an IP survey over the project area.

The company recently completed a raising, during which it received binding commitments for a placement to raise up to $2.1 million (before costs). The company has also launched a share purchase plan to allow existing eligible shareholders to participate in the equity raising at the same price as investors in the Placement.

There remains a small window left for shareholders to participate in the SPP under the same terms with the Share Purchase Plan scheduled to close on 27 February 2020.