Latin Resources Limited (ASX:LRS) has released a second batch of results from its 100% owned Noombenberry Project that has continued to show bright to ultra-bright kaolinite and high-grade halloysite with individual composite sample grades of up to 23% halloysite/87 ISO-B Brightness.

This builds on news released just a fortnight ago when the company advised the market that ‘’Exceptional results had been received from four grab/float samples collected as a part of a reconnaissance exercise in consultation with the landholder at the company’s 100% owned Noombenberry Halloysite Project in Western Australia.’’

It was noted at the time that results from the first 100 samples submitted by LRS for test work had confirmed that the project contained very high-grade halloysite with individual composite sample grades of up to 37% halloysite contained within the bright white (>75 ISO-B) to ultra-bright white (>84 IOS-B) kaolinite at Noombenberry.

Consequently, these latest results serve as further confirmation that the group could be in a position to significantly expand what is now shaping up as a highly promising resource.

On this note, Latin Resources executive director Chris Gale said, “We are extremely pleased to see our initial results mirrored in this next batch of results from our test work.

"We now have results for over 50 of our 197 holes drilled at Noombenberry, and we are seeing continuity and consistency of the high-grade halloysite and bright to ultra-bright white kaolinite.

"This is shaping up to be a very large and more importantly, a high-quality deposit that we expect will command strong attention from potential end-users."Work is well underway on building our geological wireframes, so that we can be ready to commence the resource estimate as soon as all of our test work results have been received.

"The team is focused on fast-tracking this process, as well as looking toward the next phase of drilling to extend our coverage to the north, where our initial results show the mineralisation remains open.”

Management plans to re-commence drilling once all statutory approvals have been received to extend the current drill coverage into its adjacent 100% owned tenement E77/2624 (see below), where these initial results show the bright-white kaolin and high-grade halloysite mineralisation is open to the north. 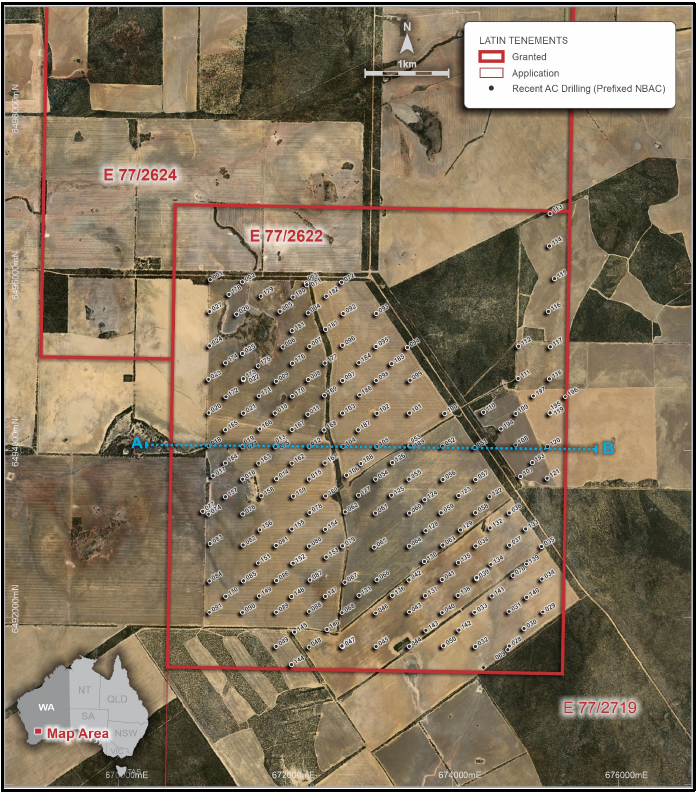 The company’s geological team is working closely with the consultant group with geological domaining and construction of the wireframe model underway.

This precursor work will enable the fast-tracking of the estimation process once all test work results have been received.

Management said that it is already receiving enquiries from potential offtake partners and the company will continue to progress these discussions as it gains a better appreciation of the scale and characteristics of the Halloysite project.

Shares in Latin Resources have surged in the last 12 months, more than doubling to yesterday’s closing price of 6.2 cents.

However, today’s positive news along with near-term catalysts such as further exploration results, the award of permitting agreements and developments regarding offtake agreements have the potential to provide substantial share price momentum.

3000m of Lithium Drilling Starting Immediately: Permits are in for LRS