Earlier in the month the company shares surged 40% following an announcement that the group had expanded its Lachlan Fold Belt position.

The review focuses strongly on the geological parallels that can be drawn between mineralogy and trends at Belgravia and those present at the Cadia Valley gold-copper porphyry region, home to one of Australia’s largest and most economic gold-copper mines that is owned by Newcrest Mining Ltd (ASX:NCM).

From a geological perspective, the presence of the world class Cadia Valley porphyry district situated 35 kilometres due south of Belgravia attests to the prospectivity for large scale porphyry gold-copper deposits within the MVB.

KTA management believes that the recently completed maiden drill program when married with recent geological mapping, has significantly improved its geological understanding and potentially unlocked the mineral prospectivity at Belgravia.

He noted that the presence of (high potassium) shoshonitic rocks were confirmed by recent drilling.

Underlining the significance of this development, shoshonites and other alkaline rocks have been established as being closely related to certain types of gold and base metal deposits, including epithermal gold and porphyry copper-gold deposits.

Independently prepared geological publications have noted that about 20% of large gold deposits, particularly in the Pacific region are associated with shoshonitic and alkaline rocks.

These findings have provided management with increased confidence regarding the company’s prospects of developing the Belgravia Project.

Putting a finer point on the two distinct zones that have been identified, they respectively correspond with edges of the Larras Lake and Copper Hill Intrusive complexes and lie close to a northwest-trending structure that separates the complexes.

From a geological perspective, the margins of major intrusive complexes can form a primary control on the location of porphyry and epithermal mineralisation.

For example, as indicated below, historical RAB/Aircore drilling by MIM Exploration located gold and copper mineralisation along the southern margin of the Larras Lake Intrusion, 400 metres to the west of EL8153. 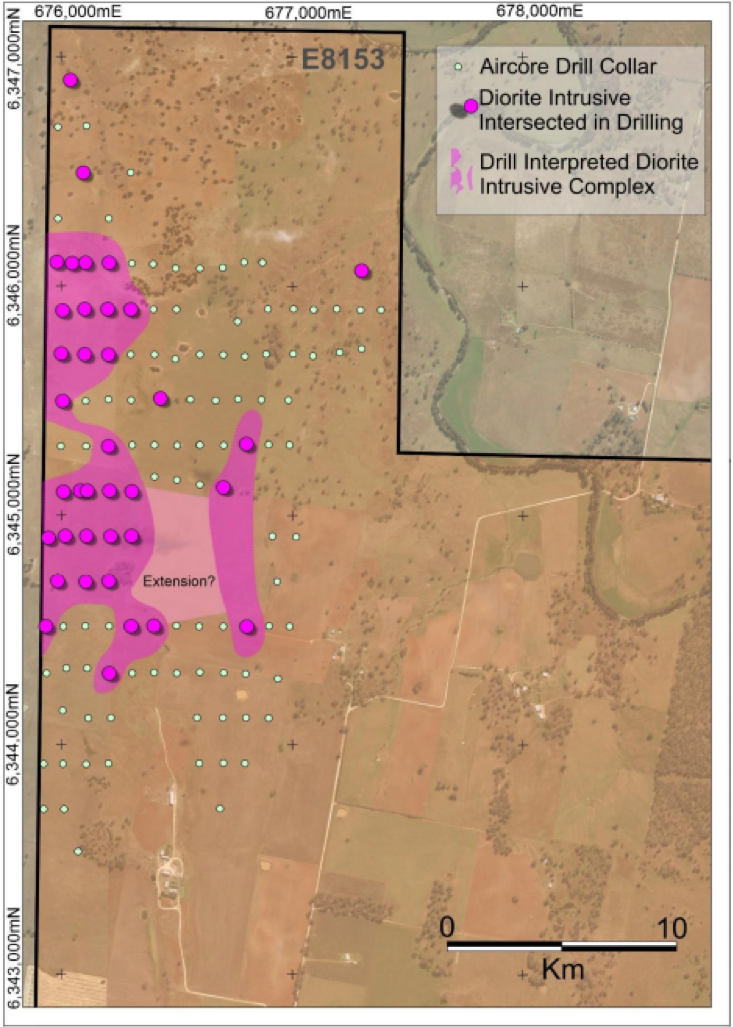 The extensive halo of low-grade mineralisation extends onto the northwest flank of the Belgravia Project.

Krakatoa’s drilling program will look to extend the mineralisation further onto the property and eagerly anticipates assay results which are due in approximately 2 weeks.

In summing up the state of play at the moment, executive chairman Colin Locke said, ‘’The drilling objective at Belgravia was to locate patterns of zoned alteration and mineralisation halos like that found at Larras Lake and Cadia.

‘’The company hopes the alteration in conjunction with any returned anomalous metal values relate to mineralisation located at depth (like at Cadia Valley).

‘’The combination of rock and alteration-type, along with returned assay results will outline targets for anticipated deeper drilling.’’

It is worth noting that the upcoming work programs have not been impacted by coronavirus related government restrictions.