The Perth Basin has become a hot spot for oil and gas explorers with the region’s profile considerably lifted by corporate activity, exploration success and recognition of the promising supply demand dynamics that should support strong pricing in the coming years.

Providing further impetus has been the success of Strike Energy (ASX: STX) which received an overnight five-fold share price increase after announcing a significant gas discovery in the Kingia sandstone as part of the West Erregulla-2 drilling campaign.

This has resulted in the company’s market capitalisation soaring from less than $100 million at the start of fiscal 2020 to more than $400 million as its shares increased from approximately 6 cents to hit a high of 31.5 cents.

While negative sentiment towards the energy sector has taken some of the shine off that, the company is enjoying plenty of support as it trades broadly in line with Hartley’s price target of 22 cents per share.

Interestingly, shares in my Stock of the Week increased more than threefold when Strike Energy released its news due to the fact that it has substantial acreage and established resources in close proximity to Strike’s discovery.

It also lost ground when the oil price came off, but has been much slower to recover, perhaps providing a buying opportunity for investors who like targeting under the radar stocks.

Key presents as the best emerging play in the Perth Basin

Though the territory in that region where Strike was successful is tightly held there is one company in particular that has the assets and the in-house expertise to build on its existing resources, potentially becoming the next Strike Energy.

The company is Key Petroleum Limited (ASX:KEY), and that is my Stock of the Week.

Highlighting the limited number of investment options in the much sought after region, analysts at Hartleys recently said, “Despite the scale of the West Erregulla discovery, the market continues to value it highly conservatively.

‘’STX is one of only a handful of companies with acreage exposed to the exciting Kingia/High Cliff play.

‘’As such there is the potential for it to be involved in M&A (mergers and acquisitions) as other players jostle to gain exposure to what is fast becoming a World class onshore play, with limited capital requirements before first gas.”

Key Petroleum is pretty much the only one with on trend High Cliff and Kingia plays remaining undrilled.

When the company last released a resource assessment it more than doubled the resource estimates in liquids taking into account the Kingia and High Cliff play, the subject of these discoveries.

Key benefits from proximity to infrastructure

Key Petroleum has a well-established position in the Perth Basin, having focused on a new phase of activity centred on the L7 (R1) Mt Horner acquisition, and the adjacent Wye Knot-1 drilling program in EP 437.

Importantly, the group’s Bookara Shelf Project comprises Key’s Perth Basin holdings and is located near infrastructure including pipelines and refineries in the Perth Basin.

Prospective resources for EP 437 and L7 now include the deeper Kingia/High Cliff Reservoirs, representing a material impact for the Bookara Shelf Project. 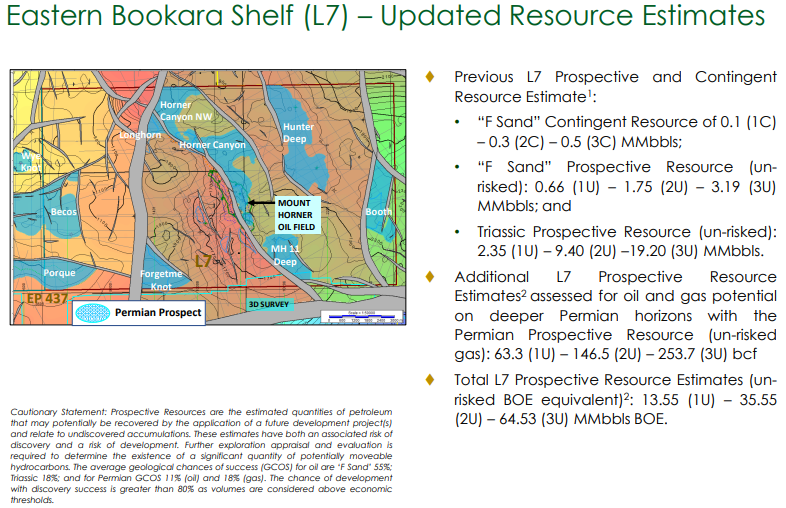 Key punches well above its weight in terms of resource comparisons

Triangle Energy (Global) Limited has committed US$3 million towards a 3D seismic acquisition program and drilling in return for 50% participation in L7 (Mt Horner).

One of the most important factors in terms of assessing Key’s investment metrics is its heavily discounted enterprise value relative to the likes of Strike Energy and even smaller player Norwest Energy (ASX: NWE) with the latter having less to offer in the way of defined resources yet trading at a significant premium to Key.

For example, Norwest has a mid-range estimated prospective gas resource of 92 billion cubic feet (BCF) at its EP 426 and EP 368 wells (net to Norwest - 20% stake).

This includes the Lockyer Deep-1 well which is a Kingia/High Cliff gas target with a 459Bcf mid case prospective gas resource (100%).

The $4 billion iron ore producer and mining services company Mineral Resources Ltd (ASX: MIN) is a substantial shareholder in Norwest with a stake of nearly 20%, and it has secured land access to drill the Lockyer Deep-1 well within EP368.

Analysts at Hartleys ran the ruler across Norwest in April, saying, “Based primarily on our risked value for EP 368/426 (minus corporate costs) we derive a 12-month forward valuation and target price of 0.47c per share.’’

This equates to a valuation of $22 million. 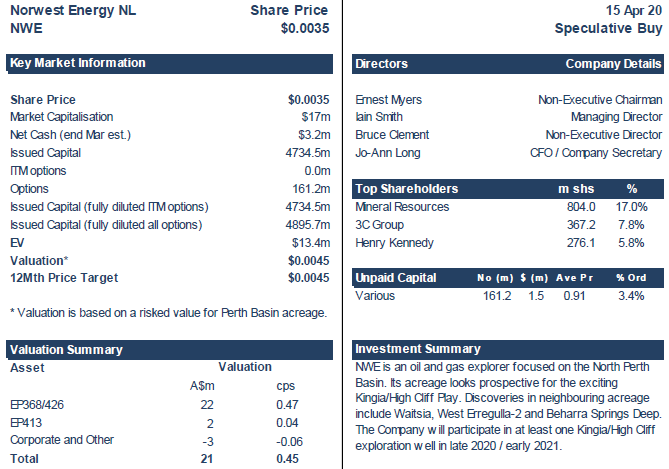 By comparison, Key is in adjacent territory as indicated by the following map (see L7 abuts Lockyer Deep field), and it has a mid-range prospective resource estimate for oil and gas potential 0f 146bcf, as well as a 300,000 barrel contingent oil resource that management believes could be accessed both quickly and cheaply. 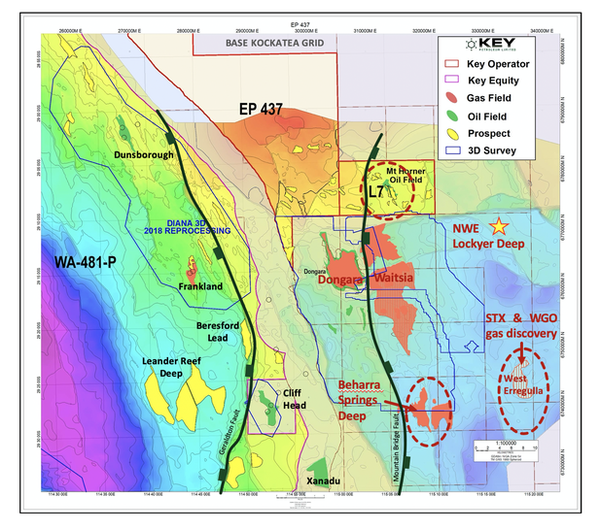 At a margin of about US$20 per barrel, this equates to oil in place of approximately US$6 million, equivalent to AUD$8.5 million, double Key’s enterprise value.

It is worth highlighting that Key has an oilfield services business which is generating revenues at an annualised rate of approximately $2.5 million.

Management can employ this arm of the company’s business to transition to production in a cost-effective manner with total control over the operation.

However, the most useful means of arriving at a fair valuation for Key Petroleum at this stage is to weigh up the size of its resource against Norwest.

Based solely on the group’s gas resource, which exceeds that of Norwest by 60%, Key should be valued in the vicinity of $35 million.

However, Key’s enterprise value currently stands at approximately $4 million, making it a potential 10 bagger as it progresses to production and/or delivers a significant discovery in an area that is establishing itself as one of the most highly prospective regions in Australia.

Aside from its asset value, what makes Key all the more attractive is its ability to generate income from the company’s services business while investing in its exploration pursuits, leaving the group less reliant on raising capital.

Cash flow generation could be strengthened further in the near term if management chooses to monetise the oil resource that is on offer at L7, as this can relatively cheaply be trucked to the Kwinana oil refinery.

Demand for both oil and gas is likely to strengthen in the coming years as indicated by the following metrics which also show the Perth Basin’s geographic advantages. 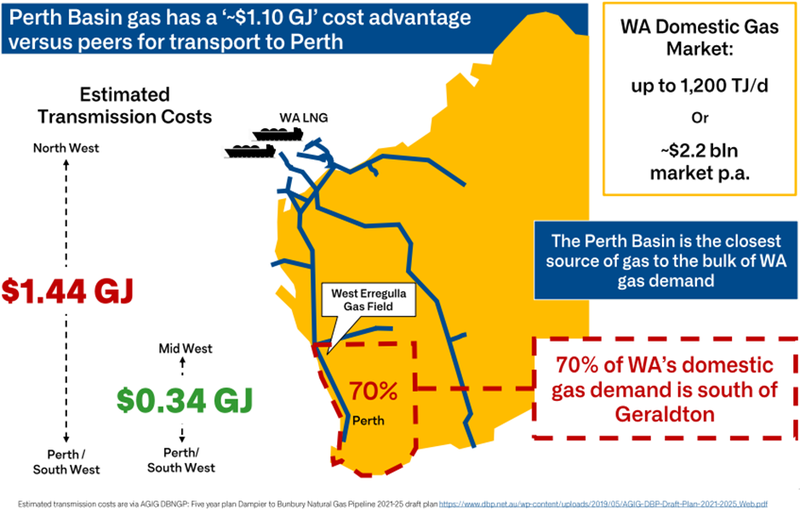 The estimated inferred enterprise value that could be attributed to Key does not assume any value for the company’s other Perth Basin assets or its Cooper Basin exploration acreage which is surrounded by Santos and New Hope Corporation with a processing memorandum of understanding in place with Beach and Santos to process future gas from the Tanbar Project.

One oil prospect is partially farmed out to Pancontinental Oil and Gas NL (ASX: PCL) and management said more farm-out activity can be expected in the near term. 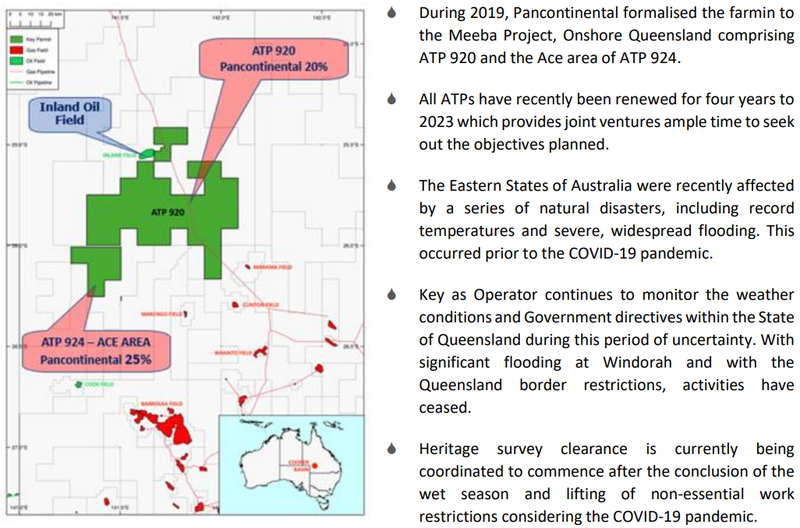 Management is also planning to drill multiple wells across its portfolio.

Access terms to the Wye Knot-1 location were agreed during the financial year and Key has made submissions for drilling approvals to DMIRS.

This could be an extremely rewarding exploration program as the exploration and appraisal well in EP 437 is designed to appraise the oil rim potential down-dip of the Wye-1 gas cap discovery and the oil potential of the deeper Permian High Cliff Formation.

Settlement for the L7 Mt Horner deal with Triangle Energy is expected in fiscal 2021, and planning for 3D seismic acquisition is anticipated imminently and then ultimately the drilling of two wells.

In the Cooper-Eromanga area flooding has limited access for heavy machinery, particularly in ATP 924 where the ‘Wild Rivers” area transgresses.

Rig slots are available for the coming financial year which would be suitable to drill the Ace Prospect and Key is preparing for the necessary approvals.

Several other parties have expressed interest in the acreage and Key is hopeful of progressing transactions that will accelerate drilling of multiple wells within the renewal period of its Cooper-Eromanga portfolio.