Is this the interest rate decision we had to have? Part 1

Despite a widening gap between the RBA’s inflation target and the Consumer Price Index (CPI), the board of the Reserve Bank of Australia (RBA) has decided to keep the cash rate target at 1.50%, a decision that was contrary to the expectations of many analysts.

The key reason was the ongoing strength in the labour market, with a significant increase in employment. The board is also cognisant of skill shortages in some areas.

Most market economists were in accord with Citi’s expectations.

The unchanged cash rate was despite the RBA signalling that it will lower its underlying CPI forecasts by 25 basis points (bp) to 1.75% this year and also by 25bps to 2.00% in 2020.

Williamson says, “Stated differently, the RBA will tolerate more downside miss on the bottom of the inflation target for longer.”

We will discuss the ramifications for equities markets at a later point, and highlight some sectors and stocks that may be worth consideration in an economic environment characterised by low growth and low interest rates, as well as equally subdued consumer and business confidence.

The RBA noted that the outlook for the global economy remained reasonable, although it conceded that the risks were tilted to the downside.

While acknowledging that growth in international trade had declined and investment intentions have softened in a number of countries, it was buoyed by the stance taken by Chinese authorities who have instigated support mechanisms for the economy, while addressing risks in the financial system.

Summarising its take on the broader global environment, the RBA said that in most advanced economies inflation remains subdued, unemployment rates are low and wages growth has picked up.

However, the latter can’t be said for Australia where poor wages growth is impacting consumer and business spending, as well as placing added pressure on a housing market that is under duress.

On the score of lending rates, the RBA said that some had declined recently, although the average mortgage rate paid is unchanged.

Citi analyst Tony Brennan seemed more realistic on the issue of borrowing rates, noting the multi-faceted dynamics that will continue to impact conditions in saying, “After a difficult 2018 with the Royal Commission (RC), 2019 hasn’t seen much abating of issues facing the banks.

“From the slowing in housing and retail banking earnings, to costs associated with responding to the RC’s findings, to unexpected developments like the extra capital sought in New Zealand, the prospects for the banks have remained clouded and complicated.

“One significant consequence is the persistence of low bank valuations, on most measures nearing the lowest in a few decades in relative terms.

“The valuations highlight the concerns, which seem to relate mostly to the risk of a substantial credit cycle, something Australia hasn’t really experienced since the early 1990s.”

And what happened in the 1990s

Of course the 1990s was marked by Paul Keating’s famous words, “This is the recession we had to have.”

Leading up to this event, Labor via the Hawke-Keating government and their stronghold on most state administrations were too reluctant to temper the industrial might and inflationary wage claims of the union movement.

Consequently, it applied cripplingly high interest rates to constrain high inflation and while the RBA cash rate was still very high at around 13%, it was down from a peak of 17.5% earlier that year, a stark contrast to today’s cash rate.

The lesson that was learnt during this period, but may have been forgotten as the federal election approaches, is that improvements in wages and conditions need to be closely linked to improved productivity, which in a healthy economy will see the cash rate generally in sync with other dynamics.

Consequently, at a time when bricks and mortar retailers, including the hospitality sector are struggling to break even let alone grow earnings, a return to onerous penalty rates appears difficult to justify.

Using interest rates to increase or decrease inflation was the flawed strategy that led to the recession we had to have, suggesting the RBA needs to look at the big picture, particularly in terms of fostering productivity, improving borrowing conditions and stimulating consumer and business confidence.

It’s all about productivity

In terms of productivity, the RBA indicated that the central scenario is for the Australian economy to grow by around 2.75% in 2019 and 2020.

This outlook is supported by increased investment in infrastructure and a pick-up in activity in the resources sector, partly in response to an increase in the prices of Australia's exports.

He believes that there is a real risk that the RBA will not have its household consumption and GDP forecast for June 2019 achieved.”

These dynamics are tied into the profitability of businesses, as well as business confidence and spending, which in turn impacts productivity.

Businesses need to feel confident in borrowing to fund future growth and they need a lending environment that is accommodating in terms of having accessibility to funds at reasonable rates, and without some of the constraints that have emerged as a result of the Royal Commission.

The Royal Commission we didn’t need

With regard to borrowing conditions, it appears that the negative impacts of the Royal Commission haven’t been recognised by the RBA.

Assessing lending applications used to be fairly easy – does the borrower have the capacity to repay the loan based on disposable income, and if repayments aren’t made, will the sale of the asset being borrowed against retrieve the amount being lent?

However, in the current environment banks need to lend on a ridiculously high serviceability basis in relation to allowing for interest rate rises, and the impost of state taxes is much more onerous.

Furthermore, we are in a Catch-22 situation with the Royal Commission having contributed to falling house prices, leading to banks now being in a position where depressed property valuations are limiting their capacity to lend.

In highlighting the severity of the situation, Geordan Murray, HIA Senior Economist did a good job in fleshing out the salient points we refer to in the following response to the ‘on hold’ decision.

“The contraction in the housing market over the past six months has occurred faster and is larger in scale than the contraction experienced after the GFC.”

“This decline in industry activity has occurred in an environment when lending rates have remained relatively stable.

“Had the RBA lowered rates today it may have eased some of the pressures in the housing market, but the acceleration in the downturn in building activity during 2018 was largely due to regulatory imposts from state and federal governments.

“Governments should be looking at measures to make home ownership more accessible to households, both as owner-occupiers and investors.

“Removing the counter cyclical measures introduced at the peak of the housing cycle would be a good place to start.

“This includes reviewing the appropriateness of assessing loan serviceability against an interest rate of 7%, almost double the current market rate. Reversal of the punitive rates of stamp duty on foreign investors is also overdue.

“These measures would assist in restoring the confidence in the housing market that was lost in 2018.

“The industry continues to complete work on existing projects but there are now fewer new projects getting underway.

“Approvals for the construction of new homes for the first three months of 2019 equates to an annualised level of home building of around 180,000 starts. This compares to 220,000 starts in 2018.

“Unless there is an improvement in housing activity, employment conditions in the building sector will continue to ease during 2019.

“Any measures that increase the tax burden on homes, such as an increase in Capital Gains Tax, would cause a further contraction in the market and exacerbate employment losses,” concluded Mr Murray.”

The following excerpt from the RBA’s statement released yesterday touches on all the key points one would expect in an environment of constrained and selective lending and depressed consumer confidence.

The adjustment in established housing markets is continuing, after the earlier large run-up in prices in some cities. Conditions remain soft and rent inflation remains low. Credit conditions for some borrowers have tightened over the past year or so. At the same time, the demand for credit by investors in the housing market has slowed noticeably as the dynamics of the housing market have changed. Growth in credit extended to owner-occupiers has eased over the past year. Mortgage rates remain low and there is strong competition for borrowers of high credit quality.

Of particular note is the ‘strong competition for borrowers of high credit quality’, indicating that there is a shrinking pool of prospective borrowers that will be able to successfully secure financing, with first home buyers particularly disadvantaged.

In closing, the RBA judged that it was appropriate to keep the cash rate on hold in the belief that there was still spare capacity in the economy and that a further improvement in the labour market was likely to be needed for inflation to be consistent with the target.

Given this assessment, the RBA said that it will be paying close attention to developments in the labour market at its upcoming meetings.

The Australian Bureau of Statistics (ABS) Retail Sales data for the month of March 2019 was again mixed, but reasonably strong versus the prior corresponding period (March 2018).

Compared with previous corresponding period (PCP), total seasonally adjusted retail sales were up 3.5% for the month of March 2019 and up 3.1% for the year to March 2019.

The original unadjusted data series for March 2019 indicated retail sales were up 1.7% compared with the previous corresponding period with the timing of the Easter holidays in March 2019 versus April 2018 having impacted positively, with a contra impact being expected in April. 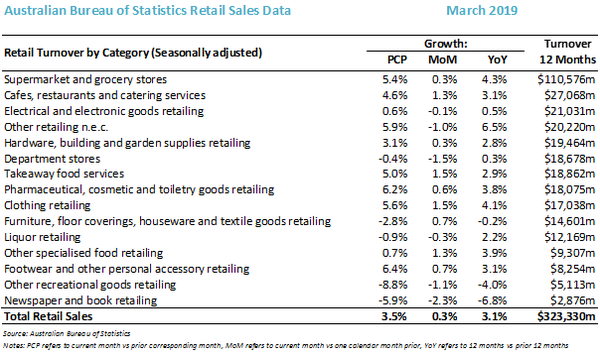 Footwear, Pharmacy, Clothing, and Other Retailing (stationery, antiques, flowers, other) had a strong month versus PCP. Food retailing also continued to be strong. Other Recreational Goods, Newspapers & Books, Furniture, and Department Store sales all declined versus PCP.

At the state level, Queensland and Victoria were the top performers, each comfortably beating the national average. Northern Territory sales once again declined versus PCP.

Reflecting on the March data and casting an eye towards April, Blue Ocean Equities analyst Phillip Pepe said, “We expect more mixed results for the April 2019 Retail Sales data, especially given the timing of Easter this year.

“The recent slowdown in the Australian housing market will likely continue to impact negatively on the housing-related categories.”

In part 2 of this article we will look at six potentially bulletproof stocks to consider in the current economic climate.

Health, wealth and …. general happiness if you have both