A couple of battery stocks rode the wave of big media this week.

Vulcan Resources (ASX: VUL)’s association with billionaire John Hancock continues to gain attention, while news that China was, as reported by The Wall St Journal, “tightening its grip on the global supply of processed manganese, rattling a range of companies world-wide that depend on the versatile metal—including the planet’s biggest electric-vehicle makers”, gave Euro Manganese (ASX: EMN) a boost.

Both companies had their own announcements. However, related media never fails to make an impact.

VUL boasts Europe’s largest JORC lithium resource, is located in the heart of Europe’s auto & EV battery industry in Germany – the fastest growing lithium market in the world and has the EU’s backing, has diversified revenue streams and has one of the world’s most rapidly advancing lithium projects.

You can read the AFR article below. Note, this is front page news: 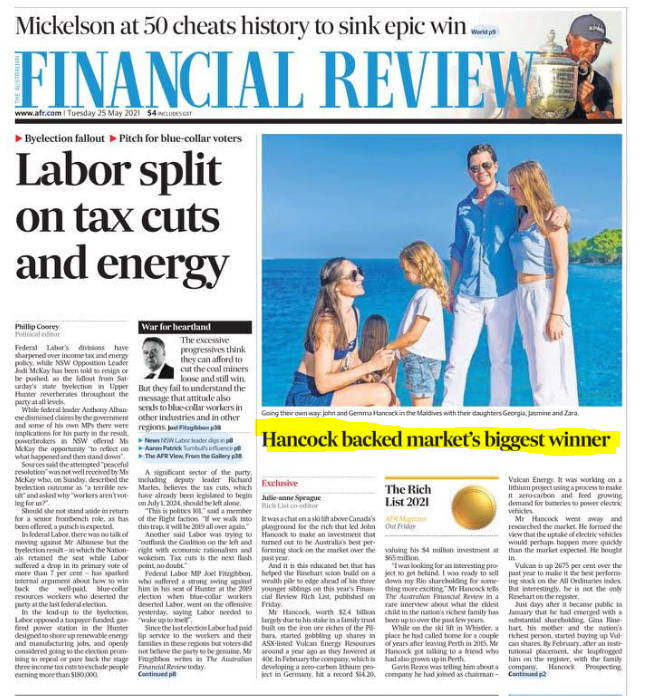 This is a key step towards large scale production and will provide key data and proof for the company’s definitive feasibility study.

Most importantly, VUL will be able to produce lithium samples for potential offtake partners.

VUL is aiming to become the world’s first lithium producer with net zero greenhouse gas emissions and its latest results push it one step closer to achieving this goal.

Could action in China benefit EMN?

EMN is developing a Green and European source of ultra-high purity manganese for Electric Vehicle batteries developed from the recycling of a tailings deposit located in the Czech Republic.

While not directly in the news, EMN could indirectly benefit from reports by major media organisations.

The Wall Street Journal published a story last weekend which could have implications for the company.

The Wall Street Journal article goes on to show the European Manganese price has almost doubled in the past few months, and continues to trend upwards.

We think The Wall Street Journal’s story will be a positive for the multiple offtake agreement discussions that EMN reported in their announcement this week.

EMN provided an update on important prerequisites leading up to the development of its proposed Chvaletice Manganese Project.

Notably, detailed design of the Chvaletice Manganese Project’s Demonstration Plant (DP) by the Changsha Research Institute for Mining and Metallurgy is progressing well, with 97% of equipment ordered and fabrication about to begin. The demonstration plant consists of six interconnected modules that will replicate the entire HPM production process to be used in the commercial operation of the project.

Finally, EMN”s Definitive Feasibility Study (DFS) will get us an updated look at EMN’s project economics. This is on track for completion in Q1 of 2022.

The best performer this week was Information Technology up over 3 per cent followed by Communication Services and Consumer Discretionary both up over 2 per cent. The worst performing sectors include Utilities down over 1 per cent with Materials, Industrials and Consumer Staples all just in the red so far for the week.

Wealth Within’s Dale Gillham tells us, “The Australian stock market has risen around 2.5 per cent over the past six days to achieve its highest close in two weeks. On five of those days, the market closed higher than it opened, which is normally a good sign, however, this is where the good news ends as I believe the Australian market will most likely start to fall away again.

“And as a word of caution, while technology stocks have been more bullish in the last couple of weeks as investors jump in with the expectation of gaining a bargain, I believe these stock will fall away again, therefore, I urge investors to be careful.”