FYI Resources shaping up as the real deal in HPA industry

Investors looking to identify a quality emerging player in the High Purity Aluminium (HPA) space should look closely at FYI Resources (ASX:FYI) as it ticks most of the boxes in terms of possessing a high-quality resource, state-of-the-art production technology and the potential to target multiple high growth industries.

In a snapshot, FYI’s primary assets are the technology, intellectual property and expertise developed in processing HPA from non-traditional feedstock, as well as the 100% owned Cadoux Kaolin Project 220 kilometres north-east of Perth where the unique feedstock can be sourced.

High Purity Alumina (HPA), defined as alumina having a grade equal or greater than 99.99% Al2O3, is a well sought after mineral due to its unique qualities and characteristics and its amenability to a diverse range of applications. .

HPA’s chemical and physical properties make the product ideal for a number of traditional and new technology applications.

The traditional uses include sapphire glass used for electronic screens such as smartphones, tablets and televisions, as well as substrates in LED’s which provide a base demand.

However, its use as the major mineral component in battery separators in electric vehicles and static power storage units is emerging as the high growth industry application for the product.

While the number of companies in exploration stages has increased in response to the underlying growth story, it is important to identify a reasonably advanced industry participant with a proven resource, solid operational and financial metrics and proof of concept in terms of being able to bring a premium product to market.

FYI has a number of similar characteristics to one of our portfolio stocks (Euro Manganese Inc: EMN) which we entered in about September last year at a price of 6 cents per share.

While FYI and EMN’s end product and production strategies vary, both companies are operating in safe mining-friendly jurisdictions and they are focused on high purity products with green energy applications.

EMN is targeting production of ultra-high-purity electrolytic manganese metal (HPEMM) with specifications exceeding 99.9% Mn and ultra-high-purity manganese sulphate monohydrate (HPMSM) with a minimum manganese content of 32.34%, both of which exceed typical industry standards.

These products stand to become an important and environmentally-sustainable part of the international and European lithium-ion battery supply chains.

Similarly, FYI benefits from having both a ‘’green’’ production process, as well as its HPA product being recognised for its environmentally beneficial applications.

With similar attributes to FYI and substantial positive newsflow being released since we invested in the stock, EMN has gone from strength to strength, with its shares closing at an all-time high of 67 cents yesterday, just three months after our investment - a promising ten-bagger that should continue to sustain this momentum on the back of positive newsflow in 2021.

Given the numerous share price catalysts on the horizon, FYI appears to have what it takes to attract similar investor attention in 2021.

The pilot plant analysis results are imminent and a second Alcoa pilot plant run/HPA product generation that should occur around February should see the company get off to a flying start.

This could well be the forerunner to the signing of a joint venture with Alcoa in February/March, another potentially significant share price catalyst.

With management in discussions with other potential offtake clients, intermittent use on this front could come as early as the first quarter.

Combine these factors with the release of a revised project economics study in March and it is easy to see the company being substantially revalued.

The delivery of a final engineering report in the June quarter should position the company to confirm its decision to proceed to construction - another highly material trigger point.

FYI has successfully trialled its pilot plant, working hand-in-hand with Alcoa Australia Ltd, a global industry leader in the production of bauxite, alumina and aluminium.

The objective of the latest collaborative pilot plant operation with Alcoa was to demonstrate the complete metallurgical process using the best scale-up practices to replicate commercial production as a condition precedent to the Memorandum of Understanding (MOU) with Alcoa. 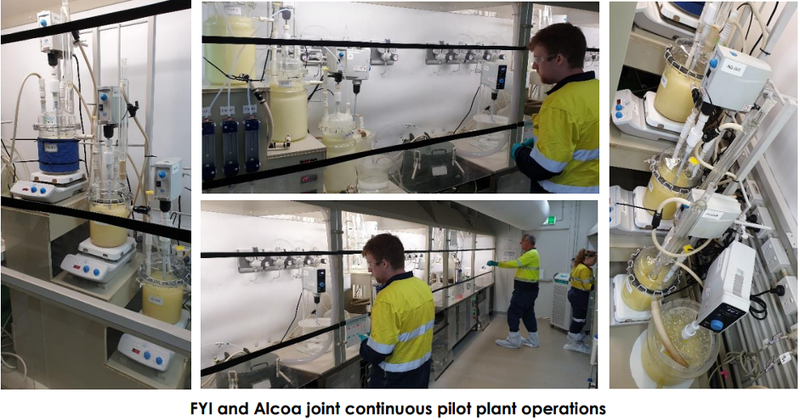 The HPA produced during the trial operation was consistent with previous trials and appeared to be of excellent quality, and it will be checked for quality control and assurance jointly prior to being forwarded by FYI to targeted end-user and customer groups for on-going product qualification.

FYI has been in advanced discussions with a number of Tier 1 industry groups across the Lithium-ion battery separator, sapphire glass and other specialty markets regarding HPA marketing and off-take arrangements.

The HPA market is growing at a compound annual growth rate (CAGR) of approximately 17% according to HPA commodity research group CRU.

Previous production trials have resulted in outstanding quality HPA which is currently being assessed by potential off-take parties.

While FYI values the opportunity to develop its relationship with Alcoa, management made the point that the project wasn’t reliant on the MOU being consummated.

But with a formalisation of the Alcoa MOU potentially imminent and the possibility of current discussions with other parties resulting in material agreements, there is the potential for FYI to undergo a significant share price rerating.

Even setting aside the possible quantum of offtake agreements, simply gaining acknowledgement from offtake partners/investors that the quality of the group’s product is suitable for high-end markets would be a major milestone.

FYI could also establish itself as a leading player with a point of difference given its potential to control the full supply chain from mining to refining and through to distribution.

Not only does this provide advantages in terms of quality control and efficient distribution capabilities, it is also expected to enable the company to produce a range of products, creating multiple revenue streams and reducing its reliance on a small client base.

This will allow FYI to target a broad range of markets, providing scale, client diversification and leverage to multiple price points, including a proportion of top-tier product segments that fetch in the order of US$50,000 per tonne.

However, FYI has been conservative with its definitive feasibility study (DFS), assuming a sale price of US$24,000 per tonne, more in line with what is referred to as 4N HPA (99.99%).

While hard and fast numbers are yet to be determined, there is already evidence that FYI will be able to produce a proportion of ultra-pure 5N HPA (99.999%) which based on independent projections should sell for about US$50,000 per tonne.

This highlights the importance of getting the technology right, and with management confident that it will release data in 2021 that will provide a strong insight into the product mix there is the potential for a significant revaluing of the company based on upgraded revenue generation and significantly increased profit margins.

As a guide to how the metrics currently stack up you can see from the following DFS that the project economics feature a robust valuation of US$543 million and a strong Internal Rate of Return (IRR) of 46%. 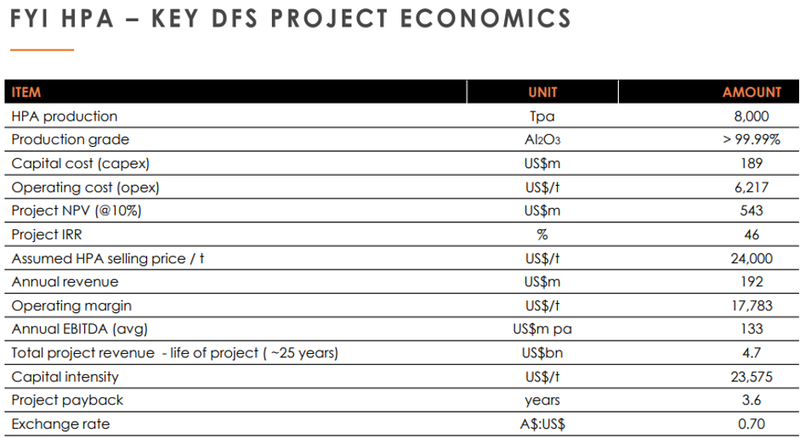 The Proven and Probable Ore Reserve for the project totals 3.2 million tonnes at 24.8% Al2O3, all contained within the area of the company-owned Mining Lease (M70/1388) and Mining Proposal.

Glancing across the DFS numbers, a combination of a high valuation, as well as a sizeable IRR isn’t a common attribute among mining projects as robust valuations are often offset by less compelling rates of return and vice versa.

Given the possible outperformance compared with the DFS due to conservative assumptions, FYI could emerge with very attractive investment merits, providing both news-driven share price accretion and the potential for an enterprise value/earnings driven rerating.

The highly impressive valuation metrics haven’t been lost on the investment community with FYI securing an A$80 million equity financing facility to progress the company’s HPA development strategy, very much an endorsement of the project’s worth, as well as management’s credibility.

The following pilot plant timeline is impressively short, highlighting management’s ability to successfully complete the trial in collaboration with Alcoa. 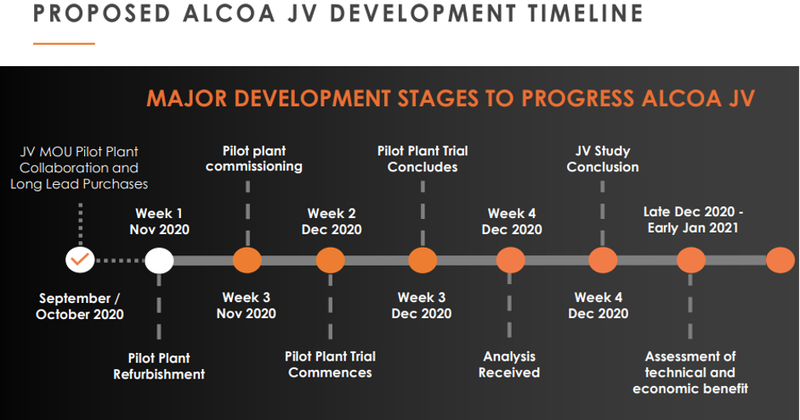 Just ahead of completing the pilot plant trial, FYI raised $6 million via a placement to sophisticated and professional investors, and these funds will be used to further refine the production process while also contributing to upcoming product marketing.

FYI is now positioned to benefit from its proven ability to quickly and efficiently bring a premium product and a sound business case to market that should generate strong returns over a 25-year mine life.

The equity will provide critical funding for the substantive development stages leading up to, and including, construction through to operation.

The funding is a key catalyst for the company’s development objectives and significantly de-risks the project.

The strengthened balance sheet will prove invaluable when management is negotiating additional project financing, and it will also assist the FYI Board in the final investment decision (FID).

HPA has emerged as one of the hottest commodities for investors aiming to tap into new-age industries such as electric vehicles and energy storage, as well as other fast-growing high-tech sectors such as those that involve semiconductors and LED screens.

Due to the substantial development in products that require HPA, as well as the refinement of processes to provide users with high-performance componentry, premium grade HPA is being increasingly sought after.

The quality of the product can be a game-changer, and as a result commodity quality/price differentials have come down to margins as low as .001% where such a degree of difference can equate to an incremental price increase of around US$25,000 per tonne.

It could be argued that the burgeoning EV industry has only just scratched the surface given expectations that enhanced electric engines will be increasingly used in much larger vehicles such as trucks, trains and planes.

The following shows the wide range of markets FYI should be able to successfully target based on its HPA quality.

The progress that has already been made in developing batteries that generate more power, as well as possessing superior charging and storing capabilities suggests global markets will be valued in the trillions of dollars in the near to medium-term.

High-quality HPA is a key commodity in maximising the performance of batteries, as well as improving other aspects such as safety features, an area of concern when the technology was in its infancy.

FYI is already positioned to be a dominant participant in high growth market applications such as LED’s, sapphire glass, semiconductors, as well as the rapidly emerging electric vehicle and static power storage.

However, FYI’s anticipated diversification of product that will potentially cover additional industries should work in its favour.

It is worth noting the following industry breakdown that highlights the anticipated high growth that is forecast to occur in both the LIB separator and LED market segments where FYI’s HPA product specifications meet the necessary requirements.