The West Yangir-1 core-hole, located some 8 kilometres to the west from the previous Yangir wells, has intersected 48 metres of coal (as measured from core by well-site geologists) to the current depth of 350 metres.

Mechanical issues and down-hole conditions have made for difficult drilling and the well’s total depth has been truncated to the 350 metres reached to date.

The Manlai-1S exploration well, located in the far North-West of the PSC, encountered mechanical issues during drilling and did not reach its target depth.

The Top Diamond LLC rig has now moved to a new sub-basin in the PSC, and it has recently commenced the drilling of a new exploration well called Kingston-1S.

The well has already encountered coals, a promising development particularly from a broader perspective given management will be drilling numerous wells in the coming months. 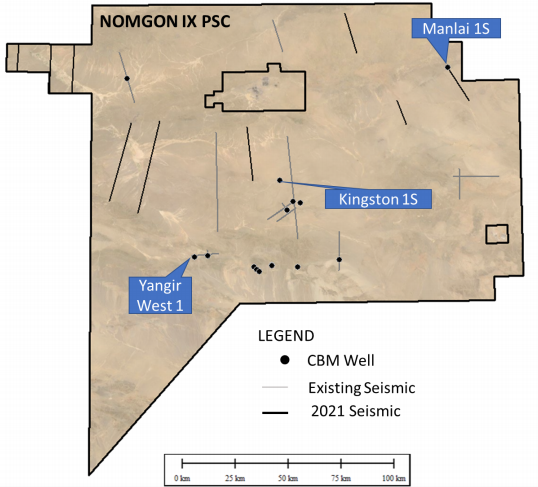 Discussing the success at Yangir-1 and the medium to long-term exploration program, managing director Neil Young said, “The very thick total coals measured in the West Yangir-1 well have been highly encouraging, as has the discovery of coals in the drilling to date in the new Kingston location.

"Our ongoing program for 2021 (and the years thereafter) has many more wells to come and is still being vigorously prosecuted, notwithstanding the global pandemic.

"Mongolia’s resilience in dealing with the varying challenges that COVID has thrown up is to be commended.”

Processing and interpretation are underway and the aim is to generate new drilling exploration targets to be pursued in the months and years to come.

An expansion of the seismic program is currently being planned.

Mongolia’s COVID experience has entered a new phase in the last month, with high transmission rates being measured in recent weeks.

However, vaccination rates have been globally high and in recent times the transmission rate has started to fall.

Elixir’s field operations have managed to successfully work within the relevant COVID rules.

Clean energy and natural gas in the Gobi desert