Element 25 (ASX: E25) and OM Materials have negotiated offtake terms for the sale of all of the manganese ore produced from the Butcherbird Manganese Project in WA.

Under the non-binding term sheet agreement with ASX-listed OM Holdings' (OMH) subsidiary, OM Materials, Element 25 will sell up to 365,000 tonnes per annum of manganese ore produced at its Butcherbird Project under stage one volumes.

In tandem with this development, Element 25 has received firm commitments to raise up to a total of $9.75 million (before costs) through a placement of 12.5 million fully paid ordinary shares at an issue price of 78 cents per share.

OM Materials will advance a further $2 million under a convertible note which is currently being drafted and is expected to be finalised shortly.

This is a credible achievement for Element 25.

The parties have proposed a pricing mechanism which is calculated as a discount against the Fast Markets published 44 per cent manganese benchmark price.

They have also agreed to the specification and pricing formula for the delivered ore between a grade of 28 to 35 per cent manganese.

The Butcherbird Manganese Project has a current JORC resource in excess of 263 million tonnes of manganese ore.

Element 25 has recently completed a PFS with respect to developing the deposit to produce manganese concentrate for export to generate early cashflow.

Another company riding the manganese wave is EMN.

The location of Euro Manganese’s Chvaletice Manganese Project in the heart of Europe is extremely important.

The group is ideally positioned to sell its high purity electrolytic manganese metal (HPEMM) and high purity manganese sulphate monohydrate (HPMSM) to both lithium-ion battery manufacturers, as well as the auto industry which is increasingly focusing on the manufacture of electric vehicles. 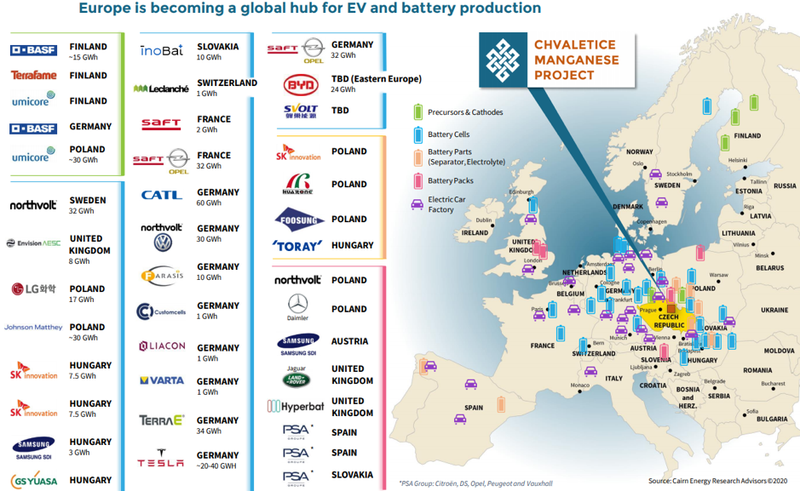 At least six large battery factories that will consume manganese inputs are located between 200 kilometres and 500 kilometres of the Chvaletice Manganese Project - others are in the process of being built across Europe.

Elon Musk’s recent comments regarding the use of a much larger proportion of manganese should see demand accelerate to levels not previously anticipated, providing premium pricing opportunities for a company such as Euro Manganese.

Musk said that he was seeking high purity manganese as a primary raw material for battery manufacture.

Production is to begin immediately and will ramp up over the coming year to 10GWH of batteries.

Telsa’s giga-factory, currently under construction in Germany, is located around 400 kilometres from EMN’s Chvaletice Manganese Project.

Europe’s automotive industry employs more than 14 million people and there has been a recent political commitment to fast track green energy projects.

Chvaletice has an established manganese resource and with a 25 year project the group is expected to be Europe’s only primary producer of the aforementioned high grade manganese commodities.

Chvaletice has the necessary infrastructure on its doorstep, including power, water and transport.

The deposit is uniform and fully drilled, making it ideal for the production of high purity manganese using clean, modern and commercially proven technologies.

The group is targeting commercial production in 2024, coinciding with a significant uptick in manganese demand as illustrated below. 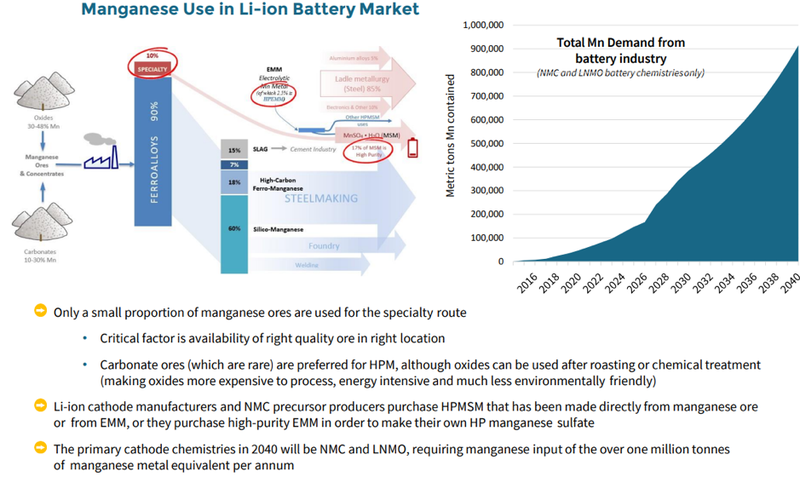 These factors will be important as the group progresses towards financing the project that has been forecast to deliver undiscounted mid-range cumulative cash flow of $3.7 billion over a 25 year mine life.

A preliminary economic assessment delivered an after-tax net present value based on a 10% discount rate of $593 million, suggesting the potential for a strong share price rerating given the group’s market capitalisation of $43 million.

While this morning’s opening share price of 25 cents per share represents a four-fold increase in the last six weeks, this is a stock that has flown under the radar for some time, and as the attached research report indicates, there are numerous catalysts on the horizon.