Gold mineralisation is hosted in quartz veins within the granite adjacent to the contact, identical in style and setting to the main drilling area at Kat Gap.

Interestingly, Classic has been a beneficiary of the recent bushfires as the removal of overburden has revealed promising surface geological features.

Highlighting the significance of these developments in relation to potentially extending the strike length at Kat Gap, chief executive Dean Goodwin said, ‘’To head south 1.2 kilometres away from our main drilling area and test a theory that historical RC drilling hadn’t penetrated deep enough to intersect gold in the granite with only 3 drill holes has been extremely satisfying.

‘’I was hoping for some reasonable gold hits in the granite under previous drill holes, but to hit high grade visible gold off the bat is absolutely terrific.

‘’This intersection is very similar to high grade gold zones intersected in our main area of drilling, whereby it contains a high-grade core, characteristic of most other intersections at Kat Gap.

‘’Consequently, this bodes extremely well for further gold mineralisation being discovered in the gap between this latest high-grade result and where our current drilling focus is at Kat Gap.’’ 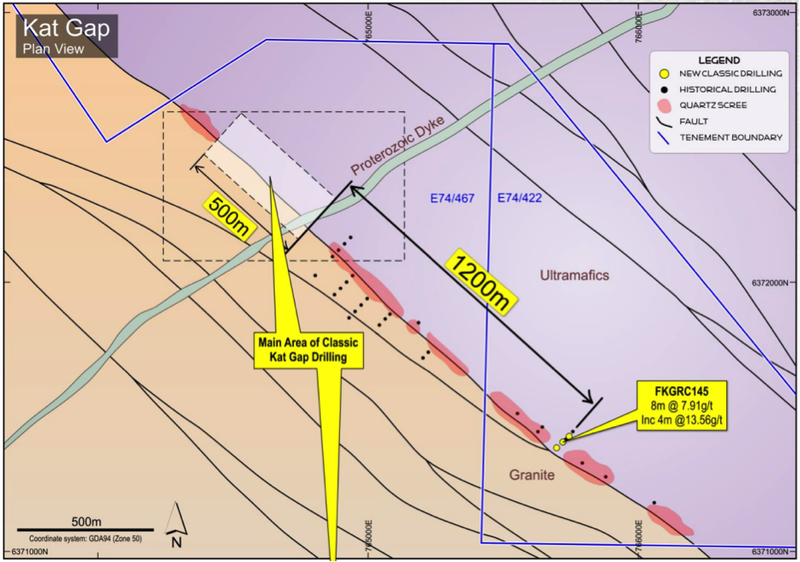 The FGP contains an existing Mineral Resource of 7.27 million tonnes at 1.33 g/t for 311,050 ounces of gold which was established following a scoping study at the group’s Lady Ada and Lady Magdalene deposit.

Classic had completed 8 separate drilling campaigns at Kat Gap prior to the most recent RC drilling program.

A total of 143 holes for more than 11,000 metres were completed between May 2018 and January 2020, all returning significant high-grade gold intercepts.

The majority of the drilling is relatively shallow, down to approximately 60 metres vertical depth below surface, covering a strike length of the granite – greenstone contact of approximately 500 metres.

The main area of drilling has been focused primarily on and adjacent to both contacts of a cross-cutting Proterozoic dyke where it intersects the main granite-greenstone contact.

At this location the gold mineralisation has been significantly enriched.

Each drilling campaign has served to increase management’s understanding of the geological characteristics of this area, an important factor in terms of delivering positive near-term exploration results and identifying new mineralisation outside the current focus area which could significantly increase the size and commercial viability of the project.

With Gold Surging, Could 2020 be CLZ’s Breakout Year?