AusQuest to progress Gunanya Gold-Copper Project with support of S32

Following meetings with its Strategic Alliance partner South32 (ASX:S32), AusQuest Limited (ASX:AQD) has advised that the Gunanya Gold-Copper Project located within the Paterson region of Western Australia has been accepted as a new exploration opportunity under the Strategic Alliance Agreement (SAA) between the companies.

Under the terms of the SAA, South32 has exclusive rights to the company’s projects and can earn a 70% interest in each project by spending a total of US$4.5 million on exploration, with the right to earn an additional 10% interest by completing prefeasibility studies.

At the Gunanya Project, the alliance is targeting large-scale gold and copper discoveries similar to those recently discovered at Winu (Rio Tinto) and Havieron (Newcrest).

Regional magnetic and gravity images in and around the Gunanya tenement can be seen below, and they show the relative proximity of Telfer and Nifty. 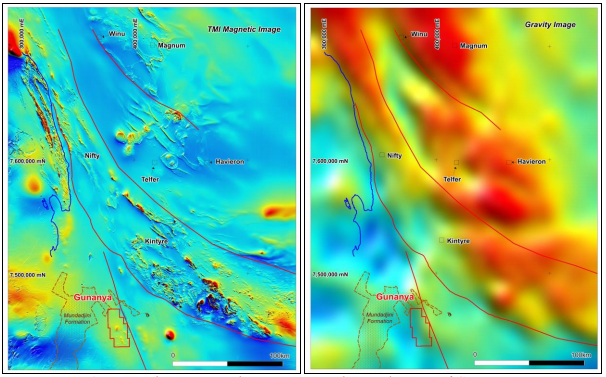 Computer modelling of detailed magnetic data acquired over the Gunanya Project infers shallow depths to the targets (50 to 100 metres) and relatively low magnetic susceptibilities for the source rocks, similar to susceptibilities implied by the low amplitude magnetic responses associated with the Winu discovery in particular.

The targets are large in size, with modelling suggesting widths of up to one kilometre and strike lengths ranging from one to five kilometres.

The targets generally strike north north-west parallel to the Madley Fault system, implying possible structural controls on the source of the magnetic anomalies, similar to the controls reported at both Winu and Havieron.

A reverse circulation (RC) drilling program is being planned to test these targets below the sandstone/glacial cover.

Heritage clearance surveys have been requested in order to provide cleared access for the drilling program.

Commenting on the significance of this development AusQuest managing director Graeme Drew said, ‘’The inclusion of the Gunanya Project under the company’s SAA with South32 adds further depth and momentum to our ongoing exploration programs across Australia.

“The Gunanya Project has several compelling targets based on analogies that we are able to draw with new discoveries in the Paterson Region from both a gold and a copper perspective.”

“Our focus will be on drill-testing these targets as soon as we have all the necessary approvals and clearances to be able to undertake the program.’’

Look beyond the gold price part 3: Finding value in the high-flying gold sector