"Early validation is underscored by partnerships with Fortescue Metals Group and WorleyParsons.”

Pezzano has placed a speculative buy recommendation on the stock with a price target of $1.00.

In the last 12 months, Aurora has made significant progress on the development of its proprietary 3D printer and powder technologies in pursuit of its aim to transform how metal parts and products are manufactured.

As indicated below (in yellow), Aurora Labs hasn’t been short on market moving news flow, but many of the positive developments coincided with the sell-off in equities that occurred in the second half of 2018.

Consequently, the company’s share price is struggling despite its apparent merits.

Significant progress has been made with Aurora’s Rapid Manufacturing Technology (RMT) which recently achieved speed increase to 113 kilograms per day or 55 times faster than Market Speed and proving scalability of RMT using its proprietary Multilevel Concurrent Printing (MCP) process.

The MCP varies from traditional 3-D printing in a number of ways.

Primarily though, with traditional 3D printing, a digital part (3D model) is run through software which slices the digital part up into a series of very thin layers.

The printer puts down a layer of powder on the print bed and then the first “slice” of the part is fed digitally to the printer and an energy beam (laser, e-beam or other) scans the surface of the powder bed, melting and fusing the powder in the exact shape and dimensions of the slice.

This process is repeated and the next layer fuses to the previous one, forming a homogenous part.

This process is repeated until all the slices have been printed. Once printed, what is left is a complete replication of the digital part that has now been printed out of metal. 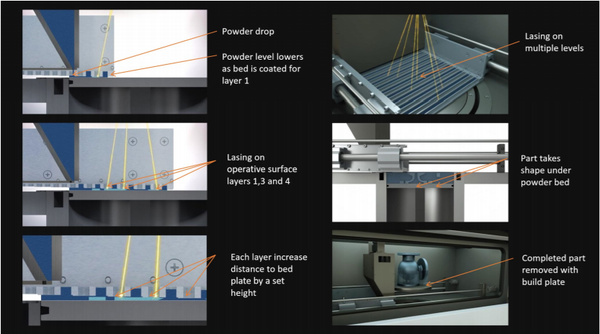 By comparison, in Aurora’s unique MCP process, multiple layers of powder are laid down at the same time.

By using a number of gates, MCP printing can be significantly faster than traditional 3D printing processes.

In other developments, the finalisation of a 50/50 Joint Venture (JV) AdditiveNow2 will provide additive manufacturing services to the oil and gas and major infrastructure sectors.

There has been further expansion to Aurora’s Industry Partner Program with the signing of preliminary non-binding agreements with VEEM Ltd and subsidiary members of Fortescue Metals Group (ASX:FMG).

This is a snapshot of Pezzano’s take on Aurora Labs, highlighting its proprietary technology, diversified applications, scalability of its technology, competitive advantages and early stage collaboration agreements with blue-chip players. 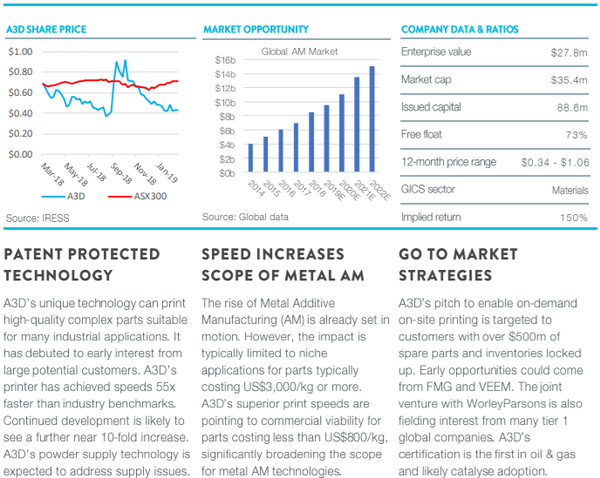