A three-hole diamond drill programme has been successfully completed for 730 metres at Nepean, designed to test three separate targets.

The location of the drillhole is shown below, indicating new diamond drill collars in relation to reverse circulation (RC) drill collars and the MLEM conductor to the south of the historic Nepean nickel mine. 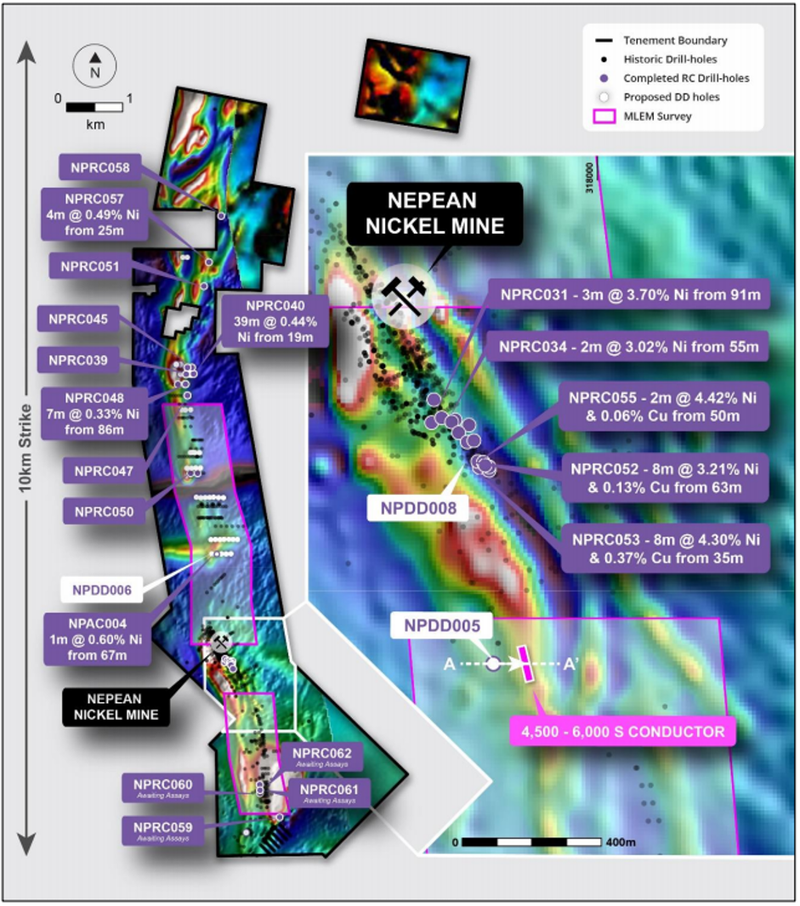 The hole was successfully drilled to a depth of nearly 400 metres and intercepted a thick package of ultramafic units from 92 metres to 253 metres down-hole, cross-cut in places by intrusive pegmatite veins.

The important footwall contact to the ultramafic package was intercepted at 253 metres and characterised by a two metre wide sediment unit containing approximately 10% sulphides of predominantly pyrrhotite, pyrite and chalcopyrite.

From a geological perspective, the ultramafic unit directly above the contact exhibits a cumulate texture and the presence of sulphidic sediments on the contact is typical of the setting required for Kambalda-style nickel sulphide mineralisation.

Down-hole electromagnetics (DHEM) have been conducted on the completed drill-hole, which confirmed that the intercepted sulphides are probably the cause of the MLEM conductor.

The drill core is currently being processed and sampled and submitted for assaying, with results, in particular the geochemistry of the contact zone, to be used for further drill targeting.

Discussing the significance of these developments, while highlighting the relationship with Kambalda-style nickel sulphide mineralisation, Auroch managing director Aidan Platel said, “We are pleased to have successfully completed our first diamond drill programme at Nepean.

"The core provided by diamond drilling allows our geologists to record so much more textural and structural information that is just not possible to see in reverse circulation drill chips, and hence is critical to understanding the geological setting of each prospect.

"The sulphidic sediments intersected by drill-hole NPDD005, whilst not nickel sulphides, are important as they provide the source of sulphur necessary for Kambalda-style nickel sulphide mineralisation, and the fact that they are underlying a thick ultramafic package is very encouraging.

"Our Nepean MLEM survey resumes this week, so we are looking forward to potentially identifying new conductors to target the next drilling campaign at Nepean.

"We are also awaiting assays for 12 drill holes from the Woodwind Prospect, along strike from the high-grade nickel sulphide mineralisation at the Horn Prospect at the Leinster Nickel Project, and we expect to have the first batch of results from these holes within the next two weeks.”

The drill-hole intercepted a sulphide zone with a width of approximately 10 metres from 66 metres and within that it intersected 3.4 metres of the 'triangular ore zone' mineralisation from 72 metres down-hole.

This hole will be processed and assayed, while DHEM investigation is scheduled for later this week with the aim of understanding the conductive response of the matrix sulphide unit, and this is expected to assist in the future targeting of regional exploration drill programmes.

The location of the anomaly is approximately 1.8 kilometres north of the historic Nepean mine.

NPDD006 was drilled to a depth of 255 metres, and the ultramafic – basalt footwall contact was intersected at 180 metres down-hole.

The drill core is currently being processed and sampled and submitted for assaying.

In line with hole 007, DHEM survey of the hole has been scheduled for later this week.