On 1 May when coronavirus was still front and centre in most people’s minds and the outlook for recommencement of international travel was very much a long-term proposition, I chose Super Retail Group (ASX: SUL) as my stock of the week.

The company had been buffeted by negative sentiment towards bricks and mortar retailers even prior to the impact of coronavirus.

Consequently, when I saw a company with outstanding brand names in resilient sectors being sold down to the tune of 60% it looked like buy time.

The other obvious appeal was the group’s strong exposure to the holiday at home theme through its boating, camping and fishing (BCF) outlets.

Even its Rebel Sports chain of stores caters for home-based activities with these likely to become more of a focus as people of all ages gravitate to the simple life of playing sport, going to the gym and exercising at home.

Since featuring Super Retail Group its shares have increased from $5.87 to a high of $8.69, an increase of nearly 50%.

As you can see below, SUL (blue line) has substantially outperformed the S&P/ASX 200 index (XJO) over the last three months with its shares up 80% as opposed to an 18% increase in the XJO.

Even after the volatility that has occurred in recent weeks, the company’s share price is trading only 30 cents shy of that high.

While I could see relatively near-term tailwinds for SUL, the same can’t be said for my selection this week.

However, my stock of the week shares a similar theme with SUL in that it should benefit from an increase in holiday at home activity, as well as being backed by a strong brand name and robust market share.

But it needs to be borne in mind that this is more of a slow and sustained recovery story from a seemingly oversold position.

Apollo looks more of a steady as she goes recovery

The company is Apollo Tourism and Leisure Ltd (ASX:ATL), and it is definitely a contrarian play with its shares having fallen from a high of 55 cents in October last year to a low of 7.5 cents when the market bottomed out in March.

While ATL’s shares have recovered to some extent since March, I believe that the structural changes management has made to assist in offsetting the coronavirus impacts, combined with the medium term upside from a sector recovery, including the potential to emerge with a greater market share as smaller players either fall by the wayside or become cheap takeover targets will leave the company well-placed for the future.

While all the bulls are talking a V-shaped recovery, I believe that ATL is a stock for investors who recognise that it will be more of a U-shaped scenario.

Just remember though, a combination of sustained low wage growth, a depreciation in the Australian dollar and, more recently, a dampening in the property market, are other factors likely to support the ‘holiday at home’ option, perhaps accelerating the speed of Apollo’s recovery.

Morgans analyst Josephine Little ran the ruler across the stock in mid-May after the company provided a trading update that clearly set out the challenges that lay ahead.

She is predicting revenues to decline in fiscal years 2020 and 2021 with a sharp year-on-year downturn in profit occurring in fiscal 2020.

However, despite predicting a further drop in revenues in fiscal 2021 she expects underlying earnings to be within about 20% of where they were in fiscal 2019, prior to the coronavirus.

Factors contributing towards the anticipated earnings recovery in fiscal 2021 include a reduction in wage costs, through reduced working hours and redundancies which will result in a fall of approximately 70% between April and October.

Management has thrown its weight behind the cost saving initiatives by cutting board and executive remuneration.

The company has closed its New Zealand manufacturing facility and scaled-down the Australian operation so it is only producing new retail vehicles to meet known demand.

This represents earnings per share of 5.3 cents, placing Apollo on a forward PE multiple of less than 6 based on the company’s current share price.

Established in 1985, Apollo is a leading Australian tourism leisure company with international operations that are highly leveraged to the increasing number of self-drive travellers.

Setting aside coronavirus, industry forecasts indicate significant growth driven by ageing populations in all of its geographical regions, with further momentum in RV sales stemming from the middle to retirement-age demographic.

Management has also seen a significant increase in the number of millennials (aged 26 to 40 this year) buying RVs, with a noticeable drop in the average age of its customers.

One of the key aspects working in favour of Apollo in terms of negotiating coronavirus conditions and its ability to stage a successful recovery is its capacity to scale the business up or down to suit demand.

The company’s business model spans all stages of the life-cycle from buying, building and importing recreational vehicles through to rentals and sales. 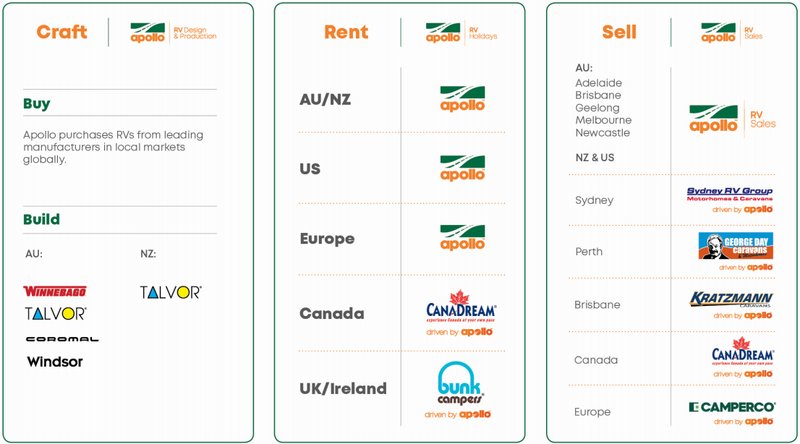 The best way to appreciate the benefits of this is to examine one of its hardest hit markets in North America.

Not only has this felt the full brunt of COVID-19 conditions, but given the still rampant conditions in the US it could be argued that it will take longer to recover.

In Morgans coverage, Little explained how Apollo had put this business into ‘’hibernation’’ and the strategies it has successfully employed in terms of managing its fleet while still looking after the company’s balance sheet and cash flow.

She said, ‘’ATL has made very good progress in recycling its US fleet.

‘’Given the upcoming 2020 key summer period is effectively a write-off, ATL has made the decision to take its fleet as close to zero as possible and extinguish its US debt.

‘’To clear the fleet, ATL has priced the units at levels below depreciated values.

‘’This will realise a June half loss of between AU$12 million and AU$12.5 million

‘’Despite this, ATL will generate more cash from the sales than the debt associated with the fleet (still equity in the fleet, despite depressed prices achieved) – so ATL will fully extinguish its AU$60 million of US debt by 30 June.’’

With regard to the company’s North American operations it is worth noting that they generated a record underlying December 2019 half earnings before interest and tax of $20.5 million, indicating the boost they will provide on the upswing.

It is also worth remembering that despite the impact of bushfires in the December half, the Australian business generated impressive year-on-year sales growth of 11.3% with this area of the company’s business generating income of approximately $80 million.

Acquisition opportunities likely to emerge on the rebound

Apollo has been a growth by acquisition story, particularly since listing on the ASX in 2016, an initiative that provided it with better access to capital.

Acquisitions have strengthened its position as the largest owned retail sales network in Australia, underpinning management’s strategy to grow retail sales and leverage the Winnebago, Talvor and Adria brands. 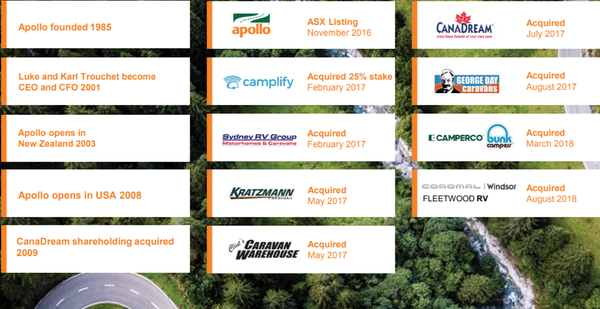 Apollo could be back on the acquisition trail by 2021, taking advantage of companies that haven’t been able to weather the conditions.

In this environment, vendors are likely to be price takers rather than price makers, providing Apollo with the opportunity to purchase businesses on much cheaper multiples than would normally be the case.

Consequently, this isn’t a company without its risks, but one could argue that the prevailing risks are factored into the depressed share price, while the potential near to medium-term upside is being ignored.