FAR Limited (ASX:FAR) announced on Monday that the COVID-19 pandemic combined with the steep fall in Brent oil price by over 60% since January 2020 had adversely impacted global financial markets including the global availability of credit.

Consequently, FAR’s ability to close the Sangomar Project debt arrangements that were ongoing during this time have been compromised such that the lead banks to the senior facility have now confirmed that they cannot complete the syndication in the current environment.

While a question mark hangs over financing, there is no question that FAR is in a strong financial position with arguably the best global energy project of any ASX listed company of a similar size.

In fact, with a market capitalisation of about $110 million, FAR is punching well above its weight – or from another perspective, it is trading well below where it should be.

As a backdrop, FAR has zero debt and cash of $150 million.

The company is a joint venture partner in developing one of the largest offshore oil discoveries of the last ten years (Sangomar), which post project delivery in early-2023 is expected to make FAR one of the largest ASX-listed oil producers – note the reserves and resources below. 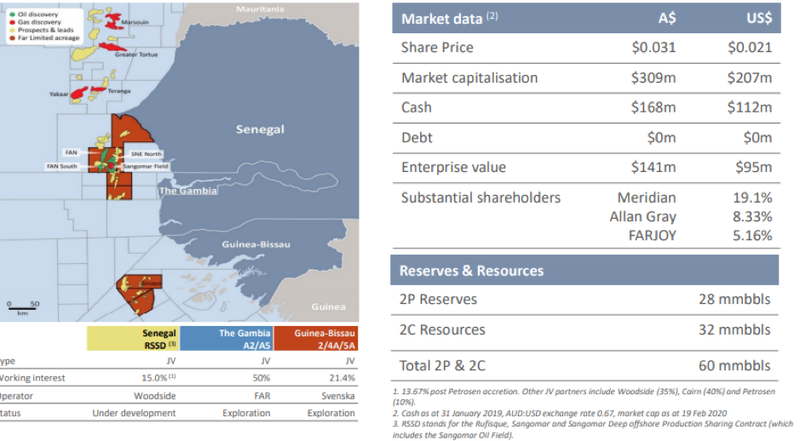 A Final Investment Decision was taken in January 2020 for the world class Sangomar Oil Field in Senegal, the largest global hydrocarbon discovery in 2014.

Sangomar is a phased development targeting up to a gross amount of 100,000 barrels of oil per day (bpd), with the potential to transform FAR from explorer to material producer in early 2023.

It is worth noting that FAR has a 15% stake in the project, as well as other interests in Gambia and Guinea-Bissau, boosting the group’s underlying asset valuation well beyond its enterprise value of $150 million.

It should be remembered that oil was trading in the vicinity of US$50 per barrel only a month ago.

Pushing above US$20 per barrel in 1999 the commodity has only ever traded below that level for a matter of weeks.

With oil now trading at sub GFC lows, it is difficult to see the commodity falling considerably lower.

Should a recovery occur, the Sangomar project will be one of the first to move to commercial viability based on its low-cost profile.

With financial and equities markets in a state of disarray at the moment, it isn’t surprising that the FAR decision has been put on hold.

However with attractive economics of an NPV10 of $650 million immediately following first oil in early 2023, it would be surprising to see FAR having to wait long in order to negotiate a suitable funding arrangement.

Plenty of shareholder value to preserve

Managing director Cath Norman is focused on maximising shareholder value, and in response to these recent developments she said, ‘’At the end of February 2020 the company had approximately $150 million cash at bank and no debt.

‘’As announced on 25 March 2020, the Sangomar Operator, Woodside, and our joint venture partners continue to explore and evaluate all options to preserve and enhance the value of this world class development.

‘’In view of the current global economic climate, the Board has commenced a process to review all strategic alternatives available to the company which are focused on preserving shareholder value for the longer term.’’

Analysts at Bell Potter ran the ruler across FAR just 10 days ago, reaffirming their buy recommendation and revising their valuation to 5 cents per share.

This isn’t far shy of the consensus valuation of 6 cents per share, but more importantly it implies share price upside of more than 300% to today’s closing price of 1.2 cents.

Consequently, yesterday’s 20% rerating could be the start of further upside.